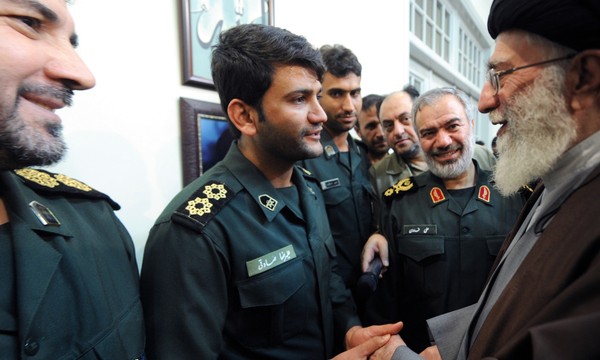 Tehran, Jan 24, IRNA – Supreme Leader of the Islamic Revolution Ayatollah Seyyed Ali Khamenei on Sunday praised a group of IRGC Navy troops for sense of responsibility to protect Iranian territorial sea and seizure of 10 US marines at sea earlier this month.

The Supreme Leader held a brief meeting with the group of personnel of the Islamic Revolution Guards Corps Navy to commend their ‘courageous’ act.
Two US navy boats were stopped by IRGC naval forces on January 12 when they entered the Iranian territorial waters near Farsi Island in the middle of the Persian Gulf.

They were released later after an inquiry determined that they entered the Iranian waters “unintentionally” due to the technical problems of one of the boats which had lost contact with their central commanding units.

“What you have done was very outstanding, interesting and timely. In fact, it was a work of God,” said the Leader referring to the incident as an “commendable and courageous” move made based on the faith of the IRGC forces.

“It was in fact a work of God that brought the Americans (marines) into our territorial waters to be arrested by your timely move with their hands put on their heads,” said the Leader referring to a picture showing the US Navy forces at the early minutes of their arrest sitting on their knees on the boats.