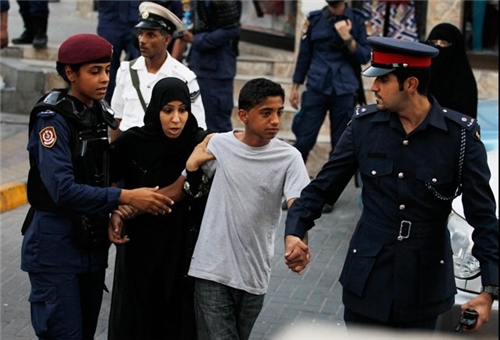 At least 250 children are behind bars on political grounds in Bahrain which is facing almost daily protests for years now, a report says.

According to a report by the Bahrain Center for Human Rights released on Wednesday, the incarcerations violate Article 16 of the Convention on the Rights of the Child.

Under the provision, no child should be subjected to arbitrary or unlawful interference with their privacy, family, or correspondence, nor to unlawful attacks on their honor and reputation, it said.

The center also called on the Bahraini regime to stop detention and interrogation of children on terrorism charges.

On Tuesday, a court in Bahrain sentenced a 17-year-old boy to an additional 10 years in prison over alleged acts of terror. Ahmad al-Arab had earlier been sentenced to 120 years in jail.

The ruling was the latest in a series of harsh punishments handed down to dissidents in Bahrain, a tiny Persian Gulf island nation that has been hit by anti-regime protests for years.

Many human rights groups have criticized the Bahraini judiciary for handing down long jail terms to protesters and activists.

Amnesty International and other rights groups have also censured the regime over “rampant” human rights abuses.

Bahraini protesters rallied in the northern village of Abu Saiba Tuesday, calling on officials to heed calls by UN and human rights organizations to release all political prisoners.

In the northeastern village of Samaheej, residents took to the streets to condemn Saudi Arabia’s recent execution of top cleric Sheikh Nimr al-Nimr.

Protest rallies in Bahrain have become a rule of the day since mid-February 2011, calling on the Al Khalifah family to relinquish power.

Aided by Saudi security forces, the Bahraini regime has responded heavy-handedly, killing scores of people and injuring hundreds others.