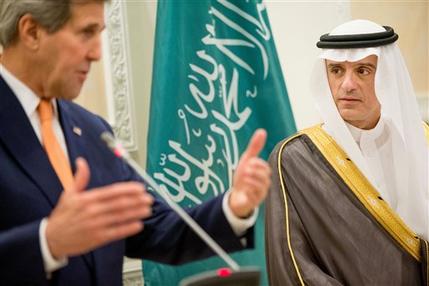 Kerry stands by Saudis while urging diplomacy with Iran

LONDON (AP) — U.S. Secretary of State John Kerry is standing by ally Saudi Arabia in its dispute with Iran, even as he seeks a diplomatic solution between the regional rivals.

Kerry’s meeting with Saudi Foreign Minister Adel al-Jubeir (AD’-duhl ahl-joo-BEHR’) comes amid America’s own difficulties with the Sunni kingdom, and as Shia Iran looks forward to a huge payoff in sanctions relief for implementing the nuclear deal.

Saudi Arabia is wary of that scenario. Washington opposes the mass executions Saudi Arabia carried out Jan. 2, sparking the crisis with Iran, which led to Saudi Arabia and others cutting diplomatic ties.

Kerry said in London Thursday that countries in the region shouldn’t interfere in others’ affairs. But he said he wants diplomacy to work.