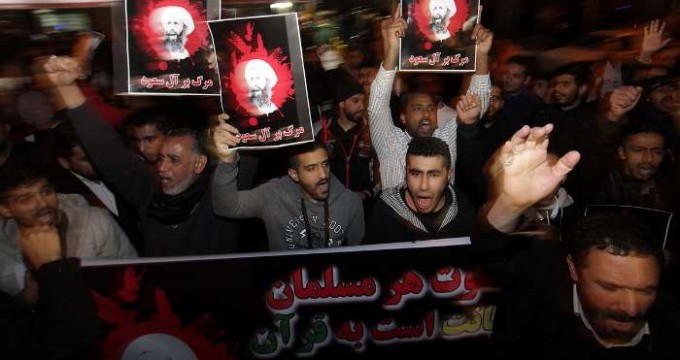 Bahrain and Sudan joined Saudi Arabia in cutting off relations with Iran, and the United Arab Emirates, a key Iranian trading partner, recalled its ambassador from Tehran, as the fallout from the execution of a prominent Shiite cleric in Saudi Arabia on Saturday heightened sectarian tensions across the Middle East.

The Obama administration, caught in the middle by its quest for a closer relationship with Iran and its long-standing alliance with Saudi Arabia, said it hoped Tehran and Riyadh would dial back the hostile rhetoric that has fueled the worst crisis between the regional rivals in decades.

“We’re urging all sides to show some restraint and to not further inflame tensions that are on quite vivid display in the region,” White House press secretary Josh Earnest told reporters in Washington.

China, the European Union and Russia also called on Tehran and Riyadh to take steps to settle their differences peacefully, with Russia, an emerging center of gravity in the region, offering to mediate between them, according to Russian news agencies.

The implications of the Saudi-Iranian rift extend far beyond their immediate rivalry as competing regional powerhouses and encompass almost all of the wars raging in the Middle East. The current crisis could further complicate efforts to resolve the Syrian war and could strengthen, by default, the Islamic State.

In another sign of fallout from the dispute, Saudi Arabia’s civil aviation authority said it was suspending all flights between Iran and Saudi Arabia, a move that raised uncertainties about the ability of Iranian pilgrims to visit the important Muslim pilgrimage site of Mecca, and of Saudi Arabian Shiites to visit shrines in Iran.

Iran said Saudi Arabia made a “strategic mistake” when it went ahead with the execution of Shiite cleric Nimr Baqr al-Nimr despite repeated warnings from Tehran that carrying out the death penalty against him would have repercussions.

Iran also, however, reiterated regrets expressed over the weekend for an attack on the Saudi Embassy in Tehran, during which protesters enraged by Nimr’s execution broke into the premises, smashed windows and furniture and then set the embassy on fire. Iran says it has arrested demonstrators responsible for the assault and has pledged to deter future attacks against all diplomatic facilities in Iran.

The island of Bahrain, whose ruling Sunni royal family faces a challenge from its majority-
Shiite population, swiftly followed the Saudi lead in breaking off relations with Tehran. The executed cleric, Nimr, had also served as an inspiration for many of the island’s Shiites. Bahrain is home to the U.S. Navy’s 5th Fleet

Sudan said it was breaking off relations with Iran “in solidarity” with Riyadh, but it wields little influence in the heart of the Middle East.

The United Arab Emirates downgraded ties, withdrawing its ambassador from Tehran and telling the Iranian ambassador in the Emirates to go home.

Other major regional powers, such as Egypt and Turkey, did not join in the diplomatic onslaught against Tehran. Turkish officials echoed calls for restraint on the part of Saudi Arabia and Iran.

The Saudi-Iranian standoff is likely to have repercussions in the wars ravaging parts of the Middle East — some of them directly fueled by the two countries’ antagonism.

The wars in Yemen and Syria in particular are at risk of worsening as a result of the rift. Saudi Arabia and Iran back rival factions in each of those countries.

“I don’t think this is going to open warfare, but it’s going to make the proxy battles worse,” said Mohamad Bazzi, a professor at New York University who is writing a book on Iranian-Saudi relations. “The pattern has been that when one side escalates, the other escalates. Now that is going to spiral.”

One major concern is the fledgling peace process in Syria, endorsed by a U.N. Security Council resolution last month, which the State Department has counted among one of its greatest achievements of 2015.

The United Nations dispatched its special envoy for Syria, Staffan de Mistura, on an emergency mission to Riyadh and Tehran to see whether the peace talks between rival Syrian factions will be able to go ahead as scheduled Jan. 25.

With Iran and Saudi Arabia not on speaking terms, it is hard to see any meaningful peace process getting underway, Bazzi said. “It was already going to be difficult,” he said. “But the Americans and the Russians had got everyone to agree to at least sit at the table, and that seems to have been erased by this.”

Also at risk is the war against the Islamic State, which is often obscured by the region’s many other rivalries.

“The growing sectarian polarization across the region will primarily benefit the Islamic State, which is promoting a sectarian narrative,” the London-based defense consultancy IHS said in a commentary.

In another reminder of the potential for sectarian rivalry unleashed by the Saudi-Iranian rift, three mosques were bombed overnight in the mixed Sunni-Shiite province of Babil in Iraq. A cleric was killed at one of them, according to news reports from Iraq.

The U.N. mission in Iraq condemned the attacks as “an attempt to stoke sectarian tensions in Iraq and the region.”

This article was written by Liz Sly for Washington Post on Jan. 4, 2016. Liz Sly is the Post’s Beirut bureau chief, and is currently covering the turmoil in the wider Middle East.