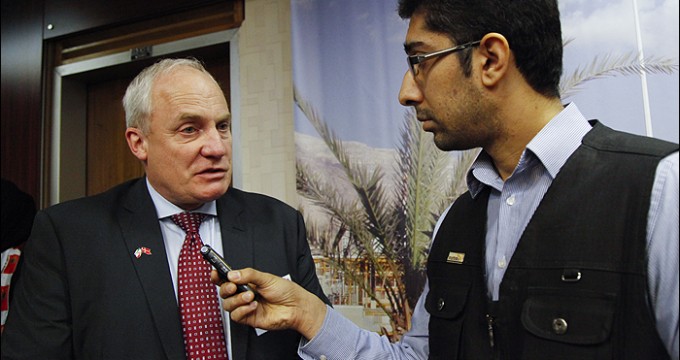 TEHRAN, Jan. 05 (Shana) — Vice president of Denmark’s Maersk said the company is gearing up to engage in Iran’s upstream oil projects in the wake of the removal of the western sanctions on the country’s energy sector.

“We have to wait for the complete lifting of the sanctions but our group of companies is very interested to come to Iran,” said Lars Nydahl Jorgensen following a meeting between Iranian Minister of Petroleum Bijan Zangeneh and Danish Foreign Minister Kristian Jensen in Tehran.

He said Maersk can offer services not only as an oil company but as a drilling company that would be ready to engage in Iran.

“We have supply vessels for big rigs and we have tanker companies and we have a terminals company that can offer infrastructures for export,” the Danish industrialist said.
He also said the Danish company is having very constructive discussions with NIOC and its subsidiaries and will continue that dialogue but “we don’t know how long that will take.”

He declined to mention the name of the field the company would engage in Iran after the sanctions removal.
Heading a 60-member delegation, Jensen arrived in Tehran on Monday to meet Iranian officials and business people on political, economic and international issues of mutual interest.

Before his meeting with the Danish FM, Foreign Minister Mohammd Javad Zarif said that Iran and Denmark would discuss expansion of mutual ties in various areas including in the field of oil industry.
Speaking at a joint press conference with Jensen, he the Danish official is scheduled to meet Iranian officials during his visit.

Topics to be negotiated during Jensen’s stay include banking, trade, economy, culture, education, research, human rights, exchange of experience, regional problems such as extremism and terrorism, anti-drugs, and Islamophobia, he added.