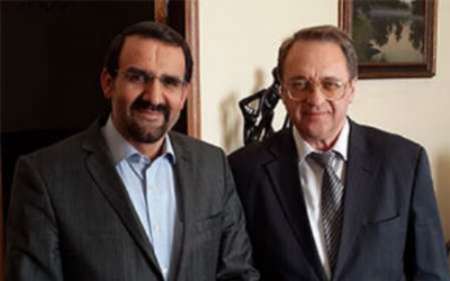 The two officials reviewed developments unfolding in the Middle East, especially the issue of Syria, given the decisions made by the Conference on Syria and Resolution 2251 of UN Security Council.
They also underlined the need for settlement of the Syrian crisis through democratic means.
Group of Syrian supporters mostly comprised of counter-Syrian camp such as the US, Saudi Arabia, Qatar and Turkey which in the five past years used all in power to deal blow to Syria and make it insecure and supported terrorist and extremist groups to achieve their ominous goals.
The group has so far convened three times, two in Vienna and the last in New York on December 18 attended by foreign ministers from 18 countries.
During the meeting, a resolution on Syrian crisis was drafted which was approved by the UN Security Council.
Iran and Russia have in the past three years criticized the West and the US for their support of terrorist groups on Syria, describing western states’ measures in Syria as contributor to terrorism.