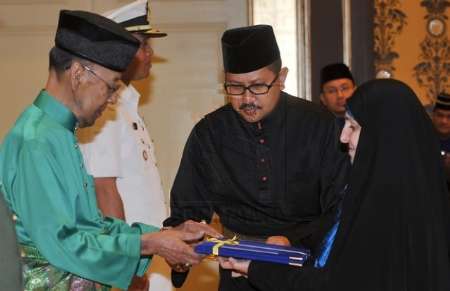 Marzieh Afkham conveyed warm greetings of Iran’s President Hassan Rouhani to the government and people of Malaysia expressing hope towards development of bilateral cooperation, strengthening of friendship ties, escalation of mutual cooperation and consultation between the two countries as well as the goodwill of the Malaysian government and nation for bolstering friendship cords.

Afkham further highlighted the significance of Iran and Malaysia in Asia and the Islamic World; “being a peaceful country, the Islamic Republic of Iran seeks stability, security and prosperity in different regions of the world and considers promotion of relations in political, economic and cultural areas as its top priority with regard to Malaysia.

Iran’s new ambassador to Kuala Lumpur also pointed out Iran’s slogan of moderation, peace and stability around the world as well as the Malaysian authorities’ emphasis on moderation.

Afkham deemed common views of the two countries’ leaders as the groundwork for a constructive and fruitful cooperation in the international arena, especially in view of the emergence of increasingly destructive and terrorist movements among Islamic countries.

The Iranian official evaluated the new space of post-sanction era as a proper opportunity for further development of bilateral relations.

Abdul Halim Mu’adzam shah, for his part, congratulated Marzieh Afkham for being the first female ambassador of the Islamic Republic of Iran and touched upon the history of the two countries in cultural, religious and economic fields; “numerous contexts exist for the development of bilateral relations and the two countries need to discover and extract more venues in this regard,” he asserted.

The Malaysian king called for the boosting of ties between the two sides in the fields of culture, youth, sports, tourism and the media; “Malaysia has always been committed to strengthening relations with Iran and the recent positive developments in Iran and the Western countries will help reinvigorate collaborations with Malaysia particularly in trade and investment sectors,” he maintained.

At the end of his remarks, Abdul Halim Mu’adzam wished luck and prosperity for Iran’s new ambassador in Malaysia and announced his country’s readiness to cooperate with the Iranian official in carrying out assumed duties.