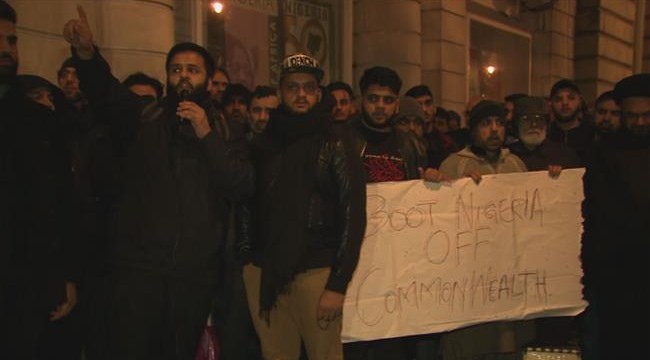 Hundreds of people have staged a demonstration in Britain to denounce the recent massacre of Shia Muslims in Nigeria and demand that all the perpetrators be brought to justice.

On Monday evening, the protesters converged outside the High Commission of Nigeria in London for a rally organized by the Islamic Human Rights Commission (IHRC), chanting slogans in condemnation of the indiscriminate killings of Shia Muslims by government troops in Nigeria’s northern city of Zaria.

According to reports, dozens of people are believed to be killed in the raid, but the IHRC has put the toll at over 1,000.

“More than a thousand innocent unarmed people have been systemically killed for nothing whatsoever. The reality is that all of what these people have done is to challenge injustice,” the IHRC chairman, Massoud Shadjarah, told Press TV.

“We are demanding justice for people who have been killed in (Nigeria’s) Zaria, and protection of Sheikh (Ibraheem) Zakzaky’s house,” Raza Kazim, a member of the IHRC, said.

The protesters also condemned the silence of the international community over the carnage in Nigeria as compared to a series of deadly attacks in Paris on November 13, when over 130 people were killed and scores injured in shootings and explosions.

“It is a massacre potentially ten times the size of what happened in Paris, and what hurts even more is hardly a single sound bite has been dedicated to the massacre of these people. Do Africans’ lives mean less than the Europeans’ lives? Do they mean less than Parisians’ lives?” a protester, requesting not to be named, said.

Sheikh Zakzaky, the leader of the Islamic Movement of Nigeria

The fatalities came on December 13, when Nigerian forces raided the house of Sheikh Zakzaky, the leader of the Islamic Movement of Nigeria, and arrested him after reportedly killing the individuals attempting to protect him. One of the movement’s senior leaders and its spokesman lost their lives during the imbroglio.

The development came a day after clashes between troops and Shia Muslims in Zaria claimed at least 15 lives and left many more injured.

Reports said soldiers opened fire on the people attending a ceremony in Hussainiyyah Baqeeyatullah, a religious center in Zaria. The Shias had reportedly stopped the convoy of the Nigeria’s Chief of Army Staff Lieutenant General Tukur Yusuf Buratai as the top Shia cleric was planning a speech in the religious center.

The Nigerian government has come under strong criticisms from international human rights groups and activists for violating religious and social freedoms, including attacks on peaceful Shia gatherings.

In July 2014, Nigerian army forces stormed Shias at a gathering in Zaria to condemn the Israeli military campaign against Palestinians in the besieged Gaza Strip. A number of people were fatally shot, including three sons of Sheikh Zakzaky.

This is while Takfiri Boko Haram militants have also targeted Shia Muslims in Nigeria. More than 20 people were killed on November 27, when a bomb attack struck an annual religious procession in the northern state of Kano. Boko Haram terrorists later claimed responsibility.