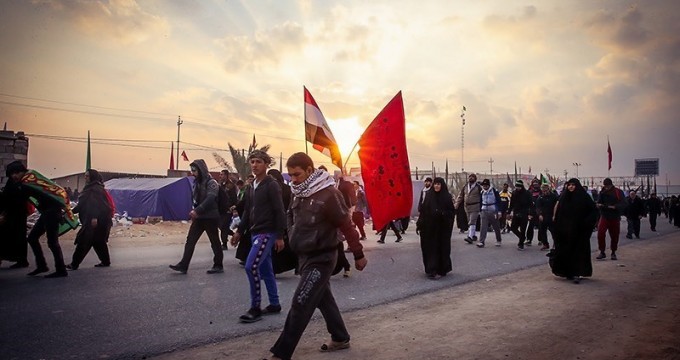 Tehran, December 1, The Iran Project– Amid the most widespread and hideous threats by ISIS militants, Arbaeen massive rally is now underway and a huge crowd of Shia Muslims from across the world walk along 80-kilometer-long road from Najaf and the cities around to Karbala.

With the security threats in Iraq on the eve of Arbaeen, the massive influx of pilgrims from different countries connotes the Shias’ statement of power and that they not only are frightened by the terrorist perils but also defy it. In simple terms, they are convoying a revolutionary message of resistance against the barbaric terrorist acts.

Beside this peculiarity, volunteering management of the gathering is highly worthy of consideration. With nearly tens of millions of pilgrims attending Arbaeen, the issue of feeding and preparing free meals by thousands of volunteers who strive to serve pilgrims also add to peculiarities of this unprecedented gathering.

Earlier Iran’s Supreme Leader Ayatollah Khamenei urged all Muslims to attend the massive march toward Karbala, calling it a divine ritual and an unprecedented phenomenon. Following Iran’s leader demand, it has involved in taking the necessary measures to hold a secure and successful Arbaeen ceremony.

Iranian military officials together with Iraqi counterparts have mobilized thousands of forces to counter any possible terrorist attacks by ISIS long ahead of the mourning rituals. In fact, all the pilgrims have been surrounded by a security belt which has been built by thousands of Iraqi police, soldiers, security guards and Iranian drones.

With keeping the close watch on the suspicious activities, all the security steps by both countries largely proved effective last year. Iran backed military operation in October, by Iraqi Army to take the village of Jurf-Sakhr in southwest of Baghdad from ISIS militants was strategic in ensuring the security of Arbaeen pilgrims in 2014. This was why despite the security threats from ISIS, Karbala had witnessed the least terrorist moves during Arbaeen annual ceremony in 2014.

Tehran municipality’s decision to dispatch thousands of workers for municipal services, following the meeting between Tehran’s mayor, Mohammad Baqer Ghalibaf and Iraqi governor of Najaf is another part of Iran’s logistic support of Arbaeen ritual this year.

In the light of new developments in the world and the region, the upcoming major event in Iraq conveys significant message to the hostile forces such as ISIS terror group. With the peril of ISIS terrorist operations, holding the mourning ceremony with attending millions of pilgrims portrays both Iran and the pro-resistant axis forces’ power and faith on one hand and on the other hand strengthening of the Shia Muslims unity across the region.

Like haj annual pilgrimage which is a huge source of income and benefit to Saudi government, Arbaeen is turning to a massive source of revenue for pro-Iran Iraqi government. It is estimated that 20 million of Muslims have annually visited the country during the ceremony in past years.

As previously discussed, the issue of the security threats by ISIS is the largest challenge ahead of both the participants and the organizers. A mortar’s attack on Friday highlighted again the security concerns surrounding the religious gathering. The integrated air base network and the complete defense coverage of pilgrims, however, would lessen the concerns over the issue of security.

Of course, when it comes to congregation, the issues of management, staffing, health care coverage and feeding participants will be underlined. The spiritual and volunteering nature of the upcoming incident facilitate management issue to some extent, but it still needs further consideration and planning.

Some analysts have compared Arbaeen gathering ritual with Hindu Kumba Mela, but considering the fact that the Hindu event is held every three years, they conclude that Arbaeen is the world’s largest annual gathering of people in one place. In fact, as the ceremony is growing year after year, there will be no doubt that the event is the most unprecedented human gathering on earth by 2020.