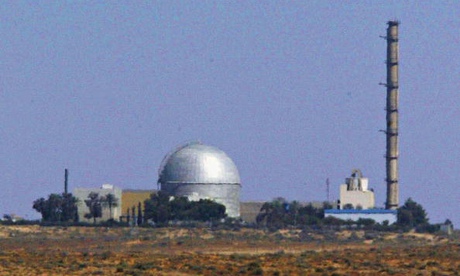 Tehran, November 22, The Iran Project- A Washington based think tank says despite Israel policy to maintain the ambiguity about its nuclear capacity, the regime possesses over 115 nuclear weapons.

A report by the Institute for Science and International Security published in 19 November 2015 says Israeli regime has produced over 660 KG of plutonium in Dimona reactor, the heart of Israel’s nuclear weapons production located near the city of Beersheva. Based on the report, the Dimona production complex contains several “secret nuclear facilities for the production of plutonium” and a heavy water reactor, too.

The American think thank whose mission is to make the nuclear activities worldwide transparent also reiterates that the Israel holds a variety of ways to deliver nuclear weapons.

Meanwhile in al-Khalil Israeli forces continues to harass Palestinians near the checkpoint under the pretext of security reasons. On Sunday, the Israeli forces arrested a young Palestinian woman for allegedly carrying a kitchen knife.

Israeli forces also closed several roads in the southern village of Beit Ummar in the West Bank, causing many troubles for Palestinian residents’ free movement. The development came one day after the Israel tightened the security measure in Gush Etzion settlement.

Elsewhere in Ramallah three Palestinians have been shot and injured by the Israel forces’ fire during the clashes. According to the Palestinian resources the clashes came after the Israeli troops opened fire at Palestinian protesters. Another Palestinian also was injured in Qalqilyia checkpoint on Sunday after he attempted to reach a hospital in Nablus where her father had passed away.

A 16-year-old girl was shot dead by an Israeli settler in Nablus on Saturday evening. The Israeli settler ran over a Palestinian girl for alleged stabbing attempt, then shooting her dead. This was while no Israelis were reported as injured. Few hours later, second Palestinian also was shot and killed in the illegal Israeli settlement in the West Bank in which the Palestinian was killed by Israeli forces following a car accident.

The Palestinian Authority Committee said Saturday that over 40 women including 18 minors have been arrested by Israeli soldiers and are being held in Israeli women prison.

They also raided Palestinian homes in West Bank overnight Friday, detaining 18 Palestinians. Palestinian resources also said the city of al-Khalil has turned to the area into a closed military zone by Israel.