A look at Iranian newspaper front pages on Nov. 10

IFP has taken a look at the front pages of newspapers on Tuesday and picked headlines from 17 of them. IFP has simply translated the headlines and does not vouch for their accuracy.

The comments of the Judiciary chief on a number of issues including the press, the nuclear deal with P5+1 and relations between the judicial and executive branches of government dominated the front pages of Iranian newspapers on Tuesday.

Ettela’at: The problem of the Internet bandwidth will soon be resolved, said the minister of communications as he visited the Ettela’at stall at the Press and News Agencies Exhibition.

Mahmoud Vaezi further said the number of people applying for access to the Internet is growing by the day.

Highlights of Ettela’at newspaper on Nov. 10 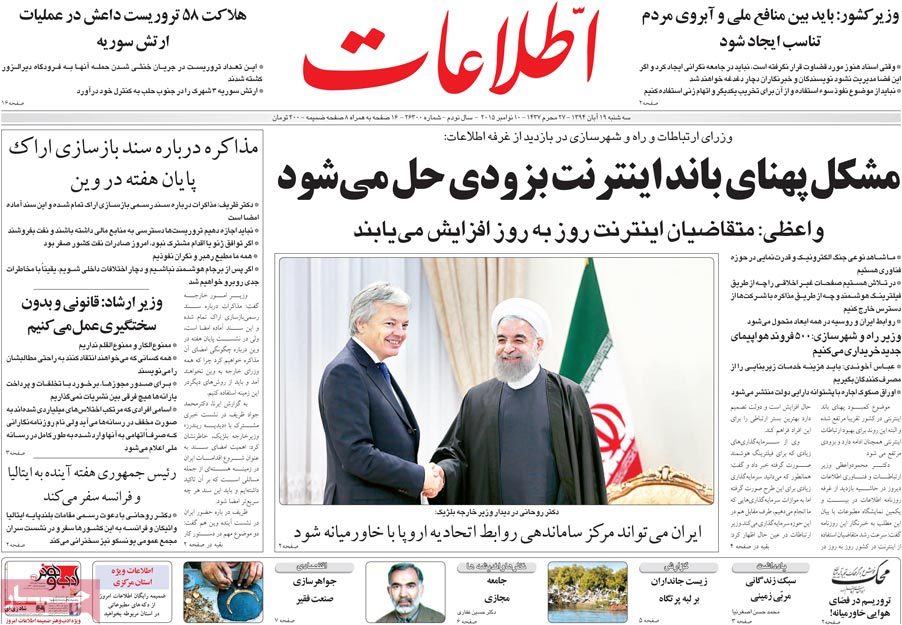 Abrar: The deputy interior minister has warned Iranian pilgrims against traveling to Iraq without securing a visa first. 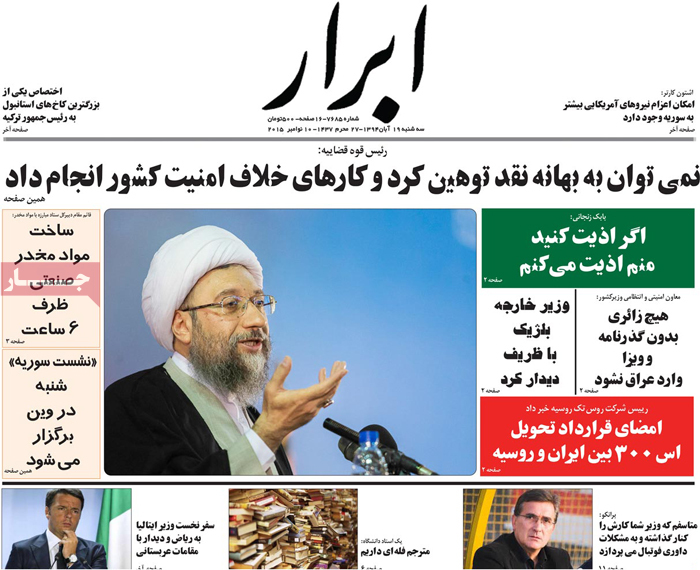 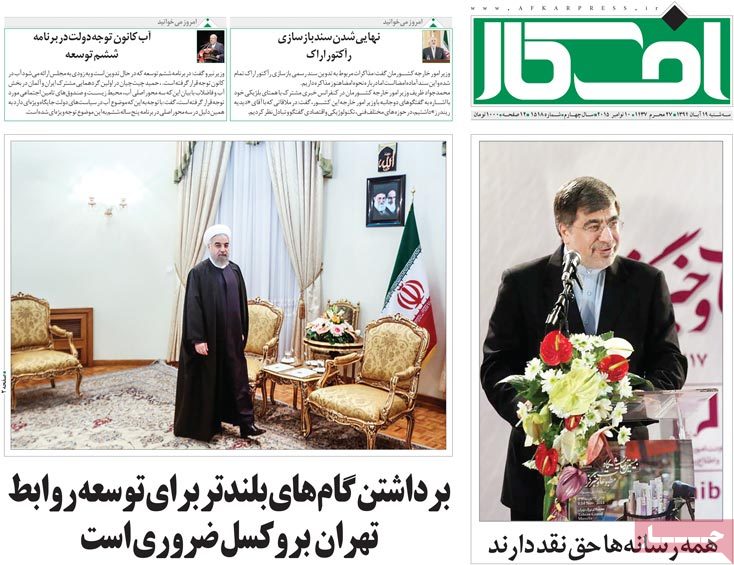 Aftab-e Yazd: The absence of a number of publications in the Press and News Agencies Exhibition won’t hurt Islam, said the minister of culture and Islamic guidance. 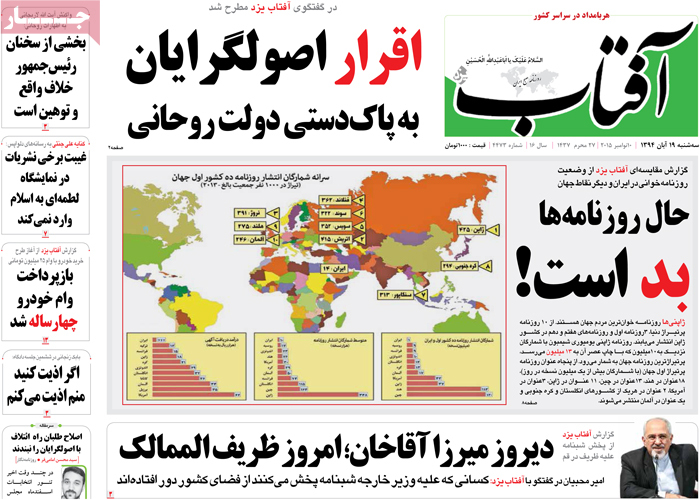 Instead of presenting a defense, Babak Zanjani [a young billionaire who is on trial for corruption] issued threats during a sixth hearing of his trial. 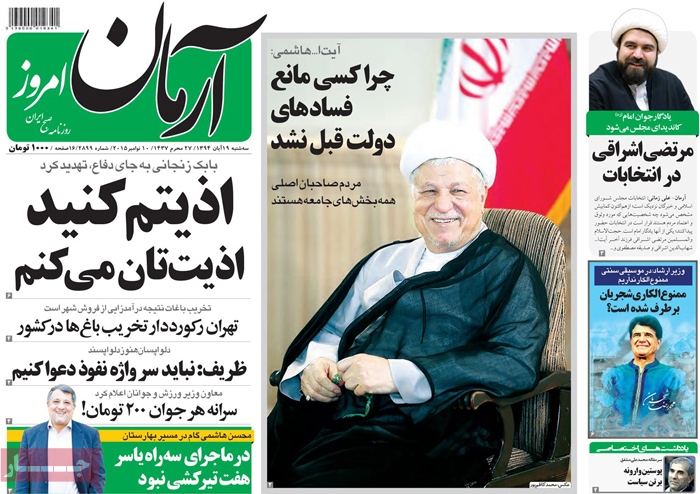 Asrar: “If the West keeps its end of the bargain, we’ll keep ours,” said President Rouhani at a meeting with the Belgian foreign minister.

Asrar: Government has taken steps above and beyond what is prescribed by freedom of press, said the minister of culture and Islamic guidance.

Asrar: Cooperation with the US hinges on progress in the implementation of the Joint Comprehensive Plan of Action, said the president’s chief of staff. 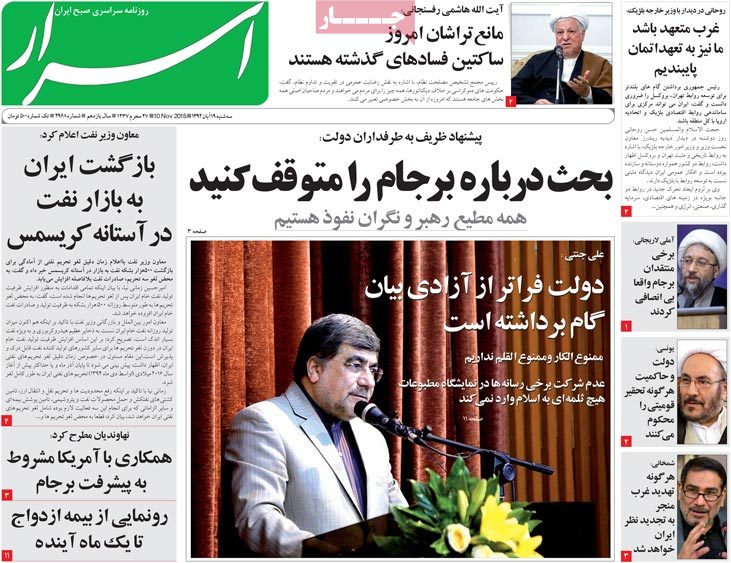 Ebtekar: Announcement of candidacy in the Press Exhibition

Mohsen Hashemi [Ayatollah Hashemi Rafsanjani’s son]: If I win the nod of the public and politicians, I will field my candidacy.

Mohammad Gharazi [A former presidential candidate]: I’ve made no deals with reformists or principlists to appear on their tickets. 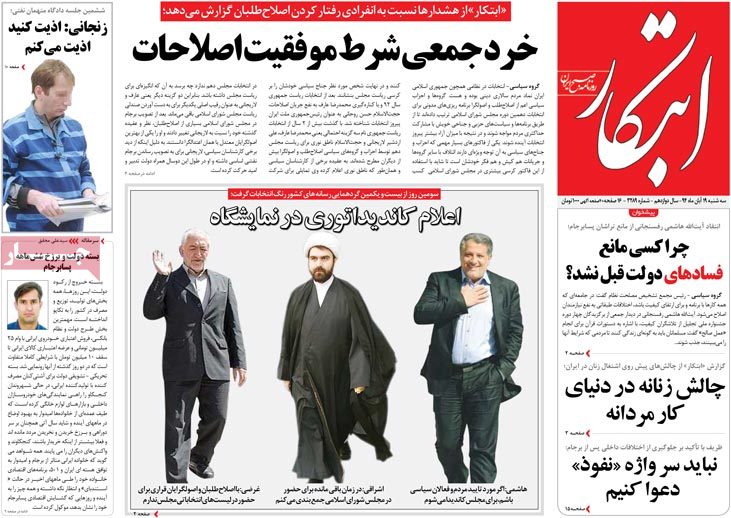 Emtiaz: The deputy interior minister has said that each year more than 700 tons of illicit drugs is confiscated in the country. 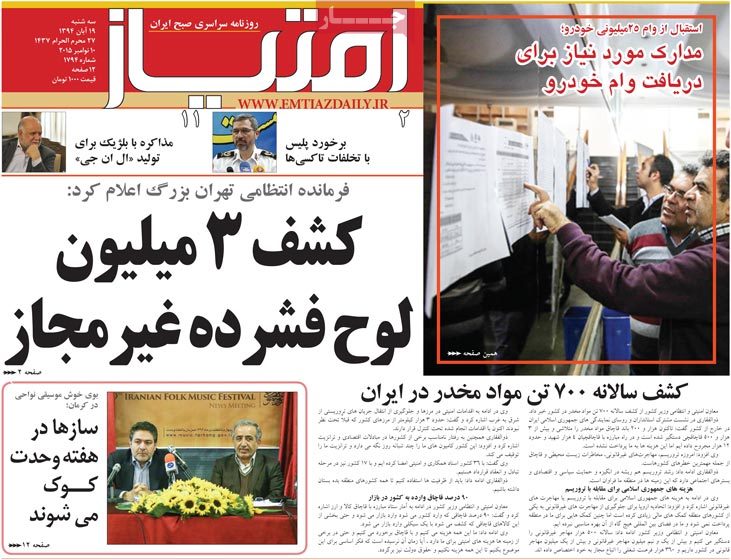 Etemad: On the first day banks began to grant car loans, some 12,000 cars were sold. 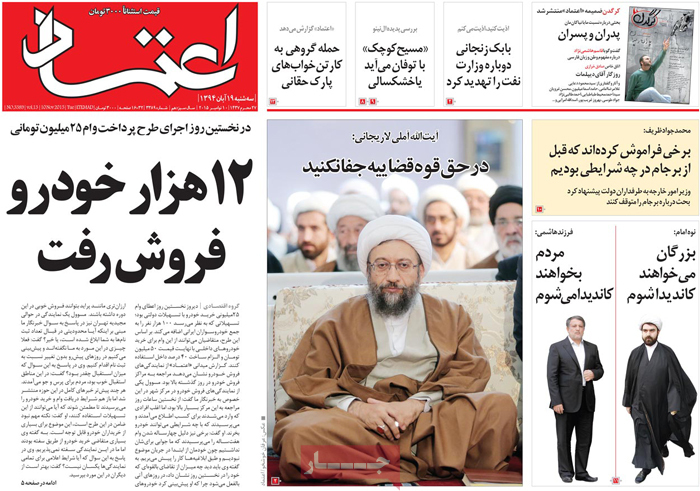 Hemayat: The Judiciary should not be subjected to injustice,” said Judiciary Chief Ayatollah Sadegh Amoli Larijani. 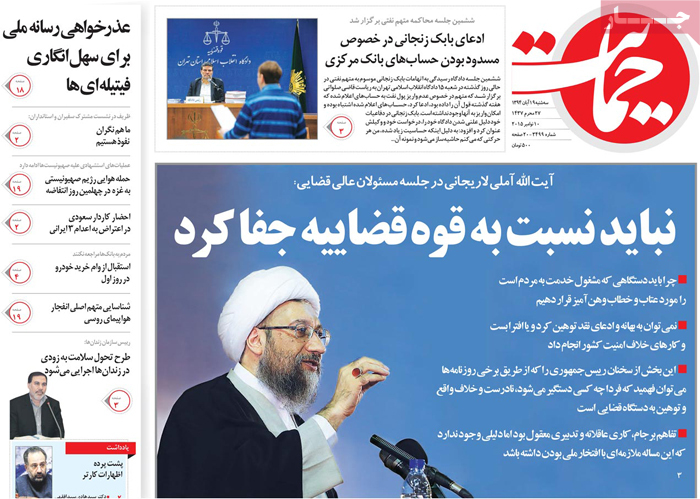 Iran: Citizens of 190 countries can secure airport visa in Iran.

That does not cover the citizens of the US, Britain and a number of Southeast Asian countries. 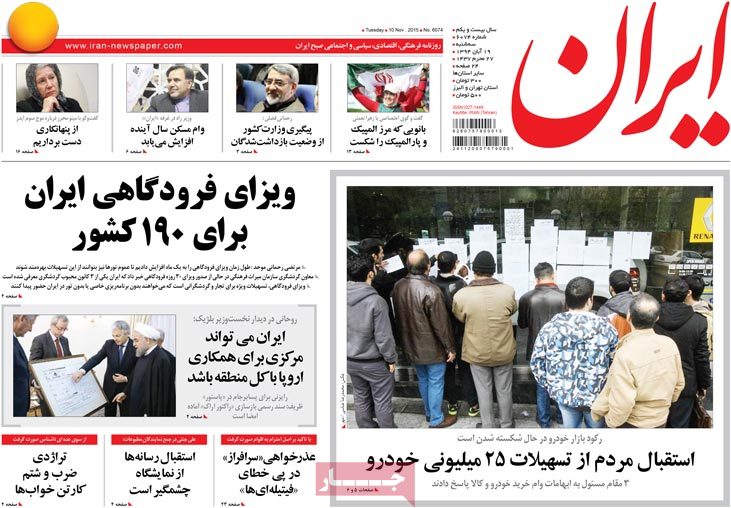 Jamejam: The IRIB President has underlined respect for ethnicities and solidarity among ethnic groups. 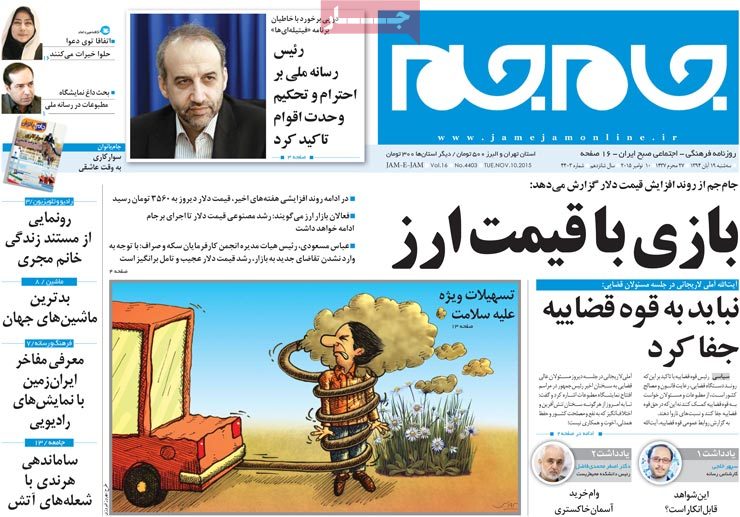 Javan: American confusion in the face of Iran and Russia’s Syria strategy

Washington is contemplating sending more troops and arms to Syria. 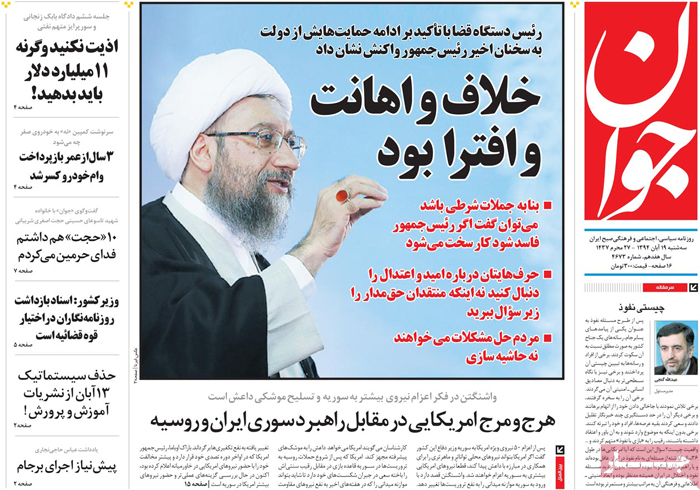 “Why wouldn’t anyone do anything to prevent the corruption committed by the previous government?” asked the chairman of the Expediency Council. 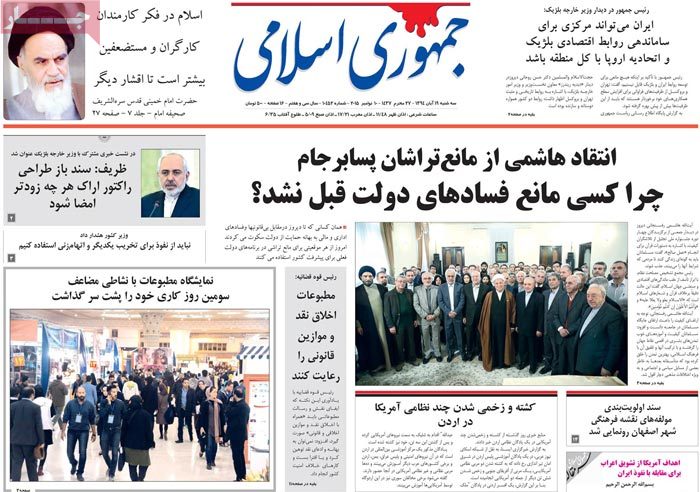 Kayhan: Babak Zanjani and the Oil Ministry at each other’s throats during a sixth hearing in the trial of the young billionaire who faces corruption charges. 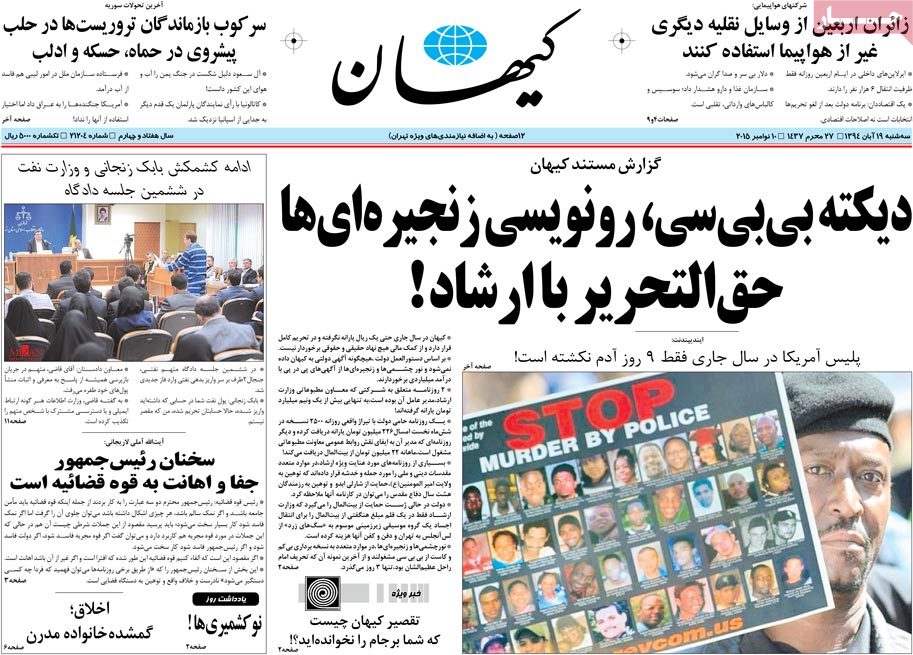 Resalat: “We are worried about infiltration too,” said Foreign Minister Mohammad Javad Zarif. 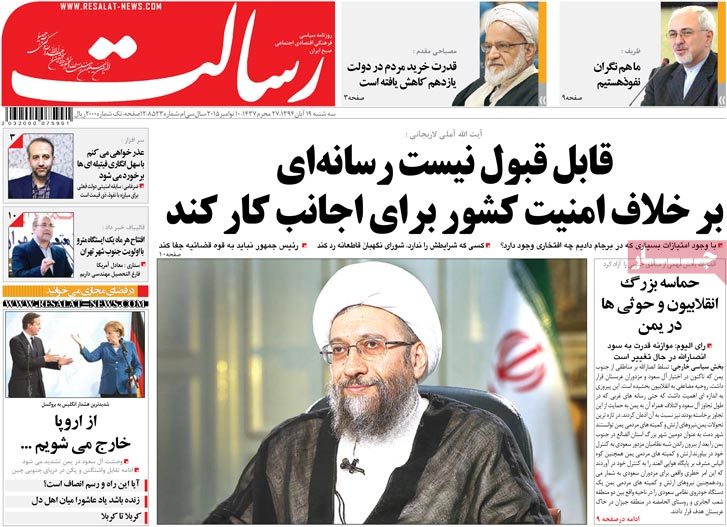 Sharq: The three Iranian nationals executed in Saudi Arabia for drug smuggling did not have legal representation. 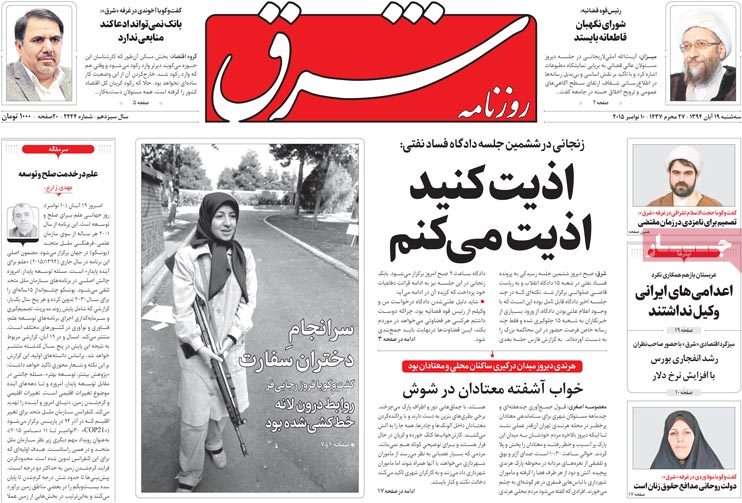