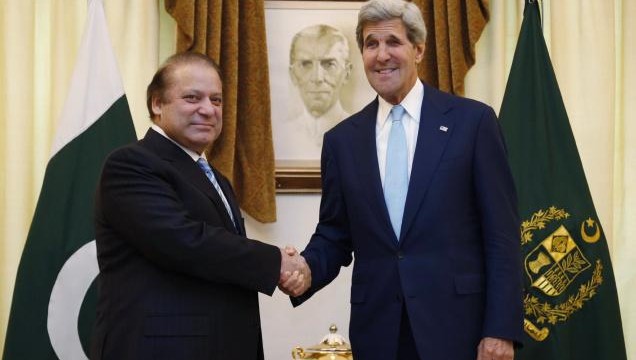 Ups, down in US-Pakistan interest-based ties

Pakistan takes advantages from its role, as it thinks that the US could face difficulties in its fight against terrorism in case it loses Islamabad. Therefore, if Pakistan intends to disrupt the course of the anti-terror campaign, given its current role and position, it would push the US in a tight corner.

The major element always disturbing the two countries’ ties and keeping them from establishing long-term and strategic relations is the mutual distrust that derives from their inconsistent objectives and strategies. It can be said that the Americans have always had a tactical view of Pakistan, and at the same time Pakistan has never viewed the US as a confident partner.

But, one major cause which has always driven Washington and Islamabad to get close to each other has been the Afghanistan issue. In the time of Afghanistan war in 1980s, Pakistan’s tactical interests, receiving financial aids from the United States, Washington’s support for Islamabad in the face of India and strengthening the government of the former military dictator, Muhammad Zia-ul-Haq, by the US have caused Pakistan to cooperate with the US in Afghanistan.

On the other hand, despite its negative attitude towards Islam, the US, due to the demands of the Cold War era and because of the need to push back the former Soviet Union from Afghanistan, resorted to Pakistan to back up the jihadi and Islamist groups in Afghanistan. But Pakistan has lost its past significance and place in the US foreign policy after the Soviet forces withdrew from Afghanistan in late 1980s.

After the end of the Cold War, the US has reviewed and modified its strategies around the world, as it set new priorities top on its agenda, the most important of which were stopping the proliferation of mass destruction weapons (WMDs) and advocating the policy of so-called fight against terrorism. In this course, India rose as an ally for the US.

Pakistan had a set of strategic goals which included achieving a balance of power with the rival India, building nuclear weapons and backing the Islamist extremist groups in Kashmir and Afghanistan. All these run counter to the Washington’s long-term and strategic objectives. Consequently, the US and Pakistan ties saw a decline in a way that after Pakistan’s nuclear test in 1998, the White House imposed sanctions on Islamabad.

After September 11, 2001, and raising the anti-terrorism policy by the US, Pakistan became significant for Washington once again. As a result, the cooperation improved between the two sides, but this time the strategic goals of these two seemingly partners set to be on the collision course again. While the US described defeating Taliban and the other Jihadi and Islamist networks as its strategic goal in Afghanistan, the Pakistani army, as the most important element in the Afghan case, has viewed the Islamist groups as very useful instrument for following its foreign policy in the face of India, keeping its toehold in Afghanistan and contain India’s influence in Afghanistan.

Therefore, the US and Pakistan have become allies while they had two entirely different agendas. This issue immersed their ties in a kind of distrust and ambiguity since  their renewal in 2002,  though they always tried to cover up their exchanged mistrust.

The complexity of the US-Pakistan relations could be illustrated with a look to two sets of figures. First, Pakistan is considered as the biggest receiver of the US military and non-military supports, including 7.5 billion USD in developmental aids through the Kerry-Lugar-Berman Act, as Islamabad is one of the largest buyers of the American arms.

The Americans have claimed that since 2001 they have provided Pakistan with over $11 billion as part of the plan of fighting against terrorism. But, according to the results of an American institute in 2010, %60 of the Pakistanis recognized the US as their enemy. In addition, %65 of Pakistan’s citizens believe that the United States could pose a military threat to their country.

Moreover, the Pakistan experts note that a considerable number of Pakistani army generals and commanders are suspicious of the American activities inside their borders, as they believe the US presents a bigger threat than India does to Pakistan in the current period of time.

Considering all these conditions, still it must be acknowledged that Pakistan and the US have always needed each other. So, Washington overlooks the Pakistani intelligence’s misconducts as it feels a serious need for a partner in Indian subcontinent. On the other side, Pakistan, which is living tough conditions, sees it unavoidable to yield to the US demands in order to keep standing.

The US would make no quick modification in its relations with Pakistan, and it keeps this situation up until a considerable progress is made in Afghanistan case. In Washington’s point of view, the problem is that there is no alternative for Islamabad in the region, so, Americans are not interested to bet on unfamiliar allies. The US views Pakistan as significant partner as it struggles to achieve its short as well as long-term objectives, and it is through Pakistan that Washington has managed to gain a persistent influence in the region.

This means that despite all of the setbacks in relations between the two countries, Pakistan serves US interests and is still enjoying the US support and confidence more than any other country in the region. On the other hand, the Pakistani politicians believe that their country would be isolated, and will face different challenges without the US supports.

This is why they are obedient when it comes to the American demands. Although some Pakistani officials take tough stances against the US excesses, the Pakistani politicians believe that strategic need and the national interests dictate that Pakistan should remain partner to the US at any expense. Pakistani leaders are of the opinion that without the US financial aids they cannot administrate  their country.