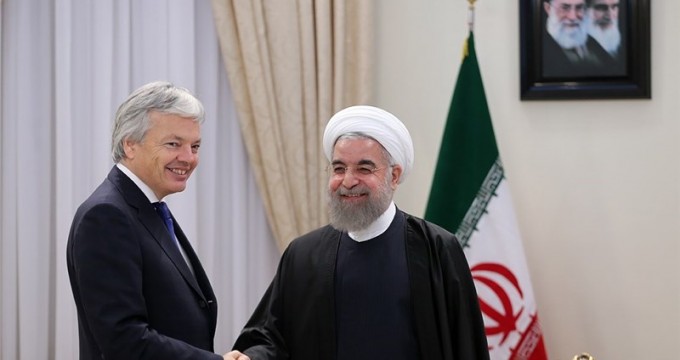 Belgian FM to Rouhani: Belgium ready to coop. with Iran on nuclear energy

TEHRAN, Nov. 09 (MNA) – Belgian Foreign Minister Didier Reynders says his country is ready to cooperate with Iran on using peaceful nuclear energy in medical fields such as diagnosis and treatment of cancer and developing diagnostic drugs.

Reynders, who is on an official visit to Iran, made the remarks in a meeting with Iranian President Hassan Rouhani on Monday, expressing hope that the lift of sanctions would further develop Tehran-Brussels ties. He also added that Belgium is keen on expanding relations with Iran in energy and economic sectors.

Reynders stressed that Belgian companies are fully ready to transfer technology to Iran and invest in the country’s various projects in the fields of petrochemical, textile, food and ports.

Underlining Iran’s effective role in resolving regional conflicts, Reynders maintained that Belgium, too, advocates a political solution for countries gripped with terrorism and insecurity such as Syria, Yemen, Iraq and Libya.

President Rouhani, for his part, stressed the need for a fresh boost in the two countries’ bilateral relations especially in the fields of economy, investment, industry, energy, as well as science, research and tourism, adding “the Islamic Republic thanks to its highly important geopolitical and geo-economic position can become a center for organizing and expanding economic relations between Belgium and the European Union and the whole region.”

Rouhani further noted that Iran and the EU’s cooperation on fighting terrorism is highly significant, expressing hope for the creation of proper conditions in which collective efforts would help restore stability and security to the region so that war-affected people could return to their homes.

The Belgian foreign minister, accompanied by Belgian Minister of Energy Marie Christine Marghem and a high-ranking political and economic delegation, arrived in Tehran on Sunday for a two-day visit. Reynders also attended a press conference with his Iranian counterpart Mohammad Javad Zarif on Monday, discussing bilateral and regional issues, including the conflict in Yemen.