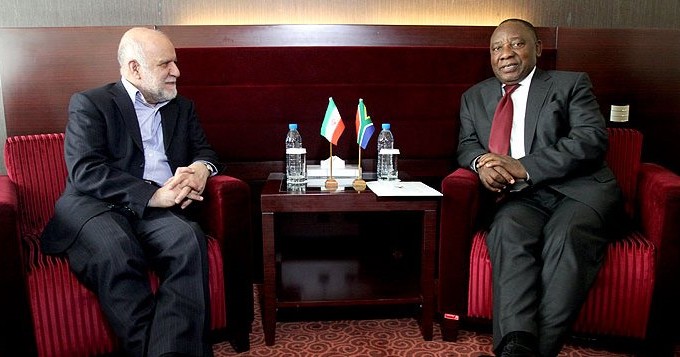 Cyril Ramaphosa visited Iran to explore opportunities for co-operation in the energy sector in a bid to attract investment into a refinery Pretoria is planning to build.

“Iran desires to restore its oil exports to the African country,” said the Iranian official, underlying Pretoria as a major purchaser of Iranian crude oil before the US-led sanctions were imposed on Tehran’s nuclear program. Iran and the P5+1 group of countries struck a historic deal in Vienna on July 14 which will limit Iran’s nuclear agenda in exchange for removal of American, EU and UN sanctions on the country.

Iran is prepared to enter into a refinery project in South Africa provided that the maximum partnership of foreign companies is guaranteed by Pretoria, Zangeneh said. “Construction of a refinery in this country [by Iran] with minimum foreign partnership will be subject to [Pretoria’s] purchase of crude oil from Iran,” he added.

South Africa is considering building an oil refinery that will process Iranian crude to bolster its petrol supply and reduce its dependence on foreign companies.

Pretoria has said it will resume oil imports from Tehran “tomorrow” if sanctions are lifted but without its own refinery, it would have to rely on foreign oil companies who own refineries in Africa’s most developed economy, said Reuters.

He said the South African side has also indicated Pretoria’s interest in importing petroleum products from Iran.
One of the highlights of the meeting, Zangeneh said, was discussing details of restoring petrochemical cooperation between Iran and South Africa.

South Africa is advanced in developing Gas-to-Liquids (GTL) technologies and “we had some talks during the meeting about this issues,” Zangeneh added.