Mustard gas was used in an attack on a town in northern Syria in August, chemical weapons experts have concluded.

The Organization for the Prohibition of Chemical Weapons (OPCW) said the chemical agent was used in the town of Marea.

Islamic State (IS) militants were accused of using mustard gas during fighting with a local rebel group.

The OPCW report said a baby “very likely” died as a result of its use.

Medecins Sans Frontieres (MSF) said at the time of the 21 August attack that it had treated four members of a family who were suffering from breathing difficulties and had developed blisters after a mortar hit their Marea home.

Local rebels said the shells had been fired from an IS-held village to the east. 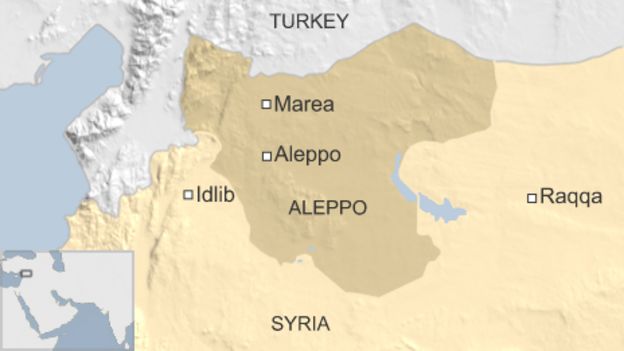 Journalists who have had access to the OPCW report say it concludes “with utmost confidence that at least two people were exposed to sulphur mustard”.

The report does not apportion blame, but diplomatic sources have confirmed the weapon was used in clashes between IS and another rebel group taking place in the town at the time, Reuters news agency reports.

Sulphur mustard – commonly known as “mustard gas” although it is liquid at ambient temperature – is a powerful irritant and blistering agent which causes severe damage to the skin, eyes and respiratory system and internal organs.

There are growing fears that IS is using chemical weapons in both Syria and Iraq.

Earlier in August, the US military said the group was suspected of having used them in an attack on Kurdish forces in northern Syria.

Reports of a sulphur mustard attack on Kurdish Peshmerga fighters in Iraq are also being investigated.

US officials have suggested IS might have obtained the sulphur mustard in Syria.

The Syrian government declared that all of its stockpiles had been destroyed under a disarmament deal agreed following a deadly sarin nerve agent attack in the suburbs of Damascus on 21 August 2013.