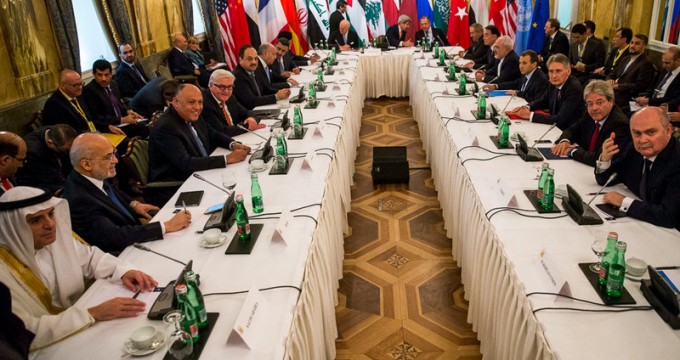 The presence of Iran at the talks in Vienna on the Syrian crisis may lead to a breakthrough, writes Camelia Entekhabifard

Hopes were raised among world leaders that a solution to the crisis in Syria might be found when Iran and Saudi Arabia sat across the table from each on 29 October for talks in Vienna.

In an unexpected diplomatic breakthrough, Iran was suddenly invited by Russia and the United States to the Syria talks. An even bigger surprise was that the other participants, including Saudi Arabia, accepted Iran’s presence.

The Arab coalition, led by Saudi Arabia, has been against Iran’s presence at any talks on Syria because of its support for the regime led by Syrian President Bashar Al-Assad and its regional military presence.

Iran has not changed its position, and neither has Saudi Arabia. But the presence of Russia at the talks and its support for Al-Assad may have led to the shift in policy for both nations.

The acceptance of the invitation by Iran does not mean that the Iranians are happy to see Russia having the upper hand in Syria, however. But Russia has provided the opportunity that Iranian leaders were looking for to attend the talks and to show their ability to help manage the crisis.

Inviting Iran to the Syria talks means that the government of Iranian President Hassan Rouhani is involved in regional dialogue at the behest of the international community. Rouhani and his foreign minister, Mohamed Javad Zarif, both want to be involved in regional matters, despite the reticence of Iran’s supreme leader, Ayatollah Ali Khamenie.

The opportunity arose when Russia entered the war in Syria and called for Iran to participate in the talks on Syria.

Ayatollah Khamenei, who has instructed the Iranian government to avoid any talks on Syria with the West, and particularly the United States, finds the presence of Iranian diplomats in Vienna easier to accept, given that Russia and the United Nations are involved.

Competition between Iran and Saudi Arabia over regional matters, from Syria to Yemen, reached its peak when 476 Iranian pilgrims recently died in Mecca during a Hajj stampede. This fuelled tensions and gave rise to fears of a possible confrontation between the two countries.

It is possible that the United States and Russia have finally come to the conclusion that the only solution for Syria is to make peace between Iran and Saudi Arabia. The co-operation of both Iran and Saudi Arabia is necessary to resolve the Syrian refugee crisis, defeat the Islamic State (IS) terrorist group, and put an end to almost five years of civil war.

If the supreme leader of Iran wishes it, withdrawing Iran’s Revolutionary Guards Corps from the region would not be difficult and, as far as Iran is concerned, ending the war in Yemen should not be a problem for Saudi Arabia.

The involvement of Iranian diplomats at the talks on Syria, with the approval of the supreme leader, could be exactly the thing the world powers are looking for to find a diplomatic solution to Syria’s future.

Saudi Foreign Minister Adel Jubier said last Wednesday that the participation in the Vienna talks was designed to test the seriousness of Russia and Iran. Not only will this participation be important for Syria’s future, but it will also reduce the tension between Iran and Saudi Arabia and be good news for the region.

The region as a whole is suffering from almost unprecedented level of mistrust. Not long ago, people from neighbouring countries were able to visit each other without difficulty.This is no longer the case because of rising competition and political differences.

But whether the Syria talks succeed or not, the presence of Iran along with Saudi Arabia should be seen as a positive move that could reduce tension in the region.

Iran may trust the Americans more than the Russians, but with few choices now on the table, it may stick with Russia as a strategic move aimed at opening diplomatic channels with other negotiators.

The presence of the United Nations at the talks also makes it easier for Iran to participate in any international coalition that may form under the UN umbrella to fight terrorism and to accept Al-Assad’s departure from power.

But there are still two weeks before the next round of the Syria talks. The outcome of that round will indicate if the differences between the parties have been narrowed.

This article was written by Camelia Entekhabifard for Al-Ahram on Nov. 5, 2015.