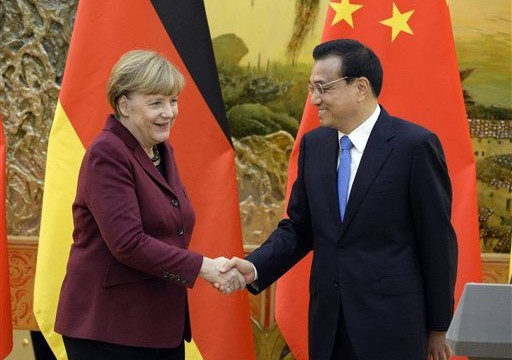 The talks among diplomats from the United States, Russia, Iran and other governments are aimed at reviving a peace process toward an end of the 4-year-old war between President Bashar Assad’s government and rebel factions.

“We both agree that we should work out a political resolution through diplomatic channels,” said Merkel at a news conference with Li. “I hope that we can soon have all the important parties sit down together to discuss the issues and offer substantial help to the Syrian people.”

Diplomats are trying to revive the 2012 Geneva Communique, which called for creating a transitional government in Syria to oversee elections as part of a political transition. Also taking part in the talks are Turkey and Saudi Arabia.

Germany, Europe’s biggest economy, is not part of the talks but Merkel is under political pressure to stem the flow of thousands of refugees from Syria and other countries into the country.

Syria overshadowed efforts by Germany and China to use Merkel’s visit to forge closer commercial ties.

Merkel, who was on her eighth visit to China since taking office in 2005, attended a signing ceremony with Li at which China committed to buying Airbus jets worth $17 billion.

Merkel endorsed the addition of China’s yuan to the basket of currencies used by the International Monetary Fund, along with the dollar, the euro, the pound and the yen. That change would have limited practical effect but is sought by Beijing as a symbol of China’s rising status in the global economy.