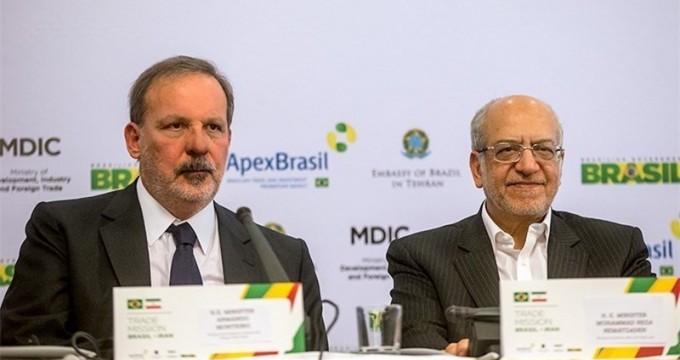 Iran keen to cooperate with Brazil in aircraft industry: Minister

TEHRAN (Tasnim) – Iranian Trade and Industry Minister Mohammad Reza Nematzadeh highlighted Brazil’s experiences in the field of aircraft industry, saying that Tehran is willing to work with the Latin American country in this area.

Brazil has a good position in the world’s aircraft industry, Nematzadeh said in a Monday meeting with a Brazilian trade delegation in Tehran headed by the South American country’s Minister of Development, Industry, and Trade Armando Monteiro.

Tehran is interested in cooperation with Brazil in civilian and training aircraft industry and the exchange of information in this field, he added.

One of the strategies for the expansion of Iran-Brazil ties is to create and develop aerial and sea routes, without which significant enhancement of cooperation would not be possible, the Iranian minister stated.

He also referred to high-tech industries, electronics, software, and medical equipment as other fields for the promotion of mutual cooperation between the two sides.

Iran has a market of 80 million people and the figure rises to 350 million if neighboring countries are also taken into account, Nematzadeh further said, stressing that such a potential can encourage the presence of investors from foreign countries, Brazil in particular, in the Iranian market.

Monteiro, for his part, praised the numerous potentials of the Iranian economy for foreign investment, saying the current bilateral trade value of $1.4 billion is way below the real capacities of the two countries.

Food industry, energy and infrastructures, electricity, mines, scientific and technological fields, oil, gas, and petro-chemistry are among the areas in which the two sides can cooperate, the Brazilian minister noted.