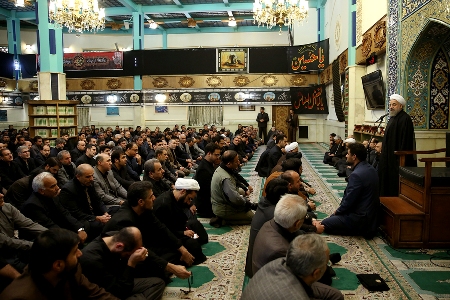 President Rouhani told a group of Muharram mourners here on Wednesday, ‘To successfully remove the problems ahead, we should feel that we are in the path of divine test and the problems ahead are all divine tests.’
He went on to say that one of the big tests facing the Iranian nation over recent years was the nuclear issue.
‘Iranian nation was not scared of any difficulty when being subject to such a divine test. It resisted all the hardships and problems and sent the most competent negotiators to the scene to solve problems.’
‘That was a big test to stand on our foot,’ he added, ‘The nation resisted well and your envoys in the test acted in such a way to emerge triumphant in history. We did not give any tramp card. Instead, we gained what we were entitled to and demanded.’
‘Nobody imagined we will be able to have all the anti-Iran resolutions of the UN Security Council lifted. Even many countries and even big powers could not imagine all the economic, financial and banking sanctions will be removed,’ Rouhani said.