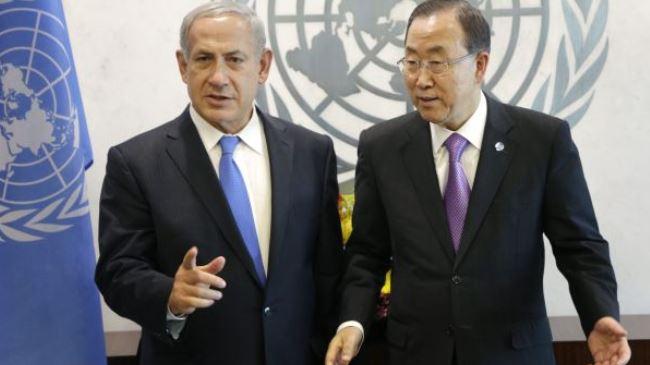 United Nations Secretary General Ban Ki-moon has failed to condemn Israeli atrocities against Palestinians during a visit to the occupied territories.

The UN chief on Wednesday only expressed condolences to the victims of recent Israeli aggression against Palestinians during a press conference after a meeting with Palestinian President Mahmoud Abbas in the occupied West Bank city of Ramallah.

“We will continue to support all efforts to create the conditions to make meaningful negotiations possible,” Ban told journalists after the meeting.

He, however, said there is no justification for the killings by Israelis in the occupied territories.

According to a report by the Palestinian Health Ministry, over 50 Palestinians, including 12 children, have been killed in clashes with Israeli forces and settlers since October began.

A Palestinian protester is seen during clashes with Israeli forces in the West Bank town of Bireh, on the northern outskirts of Ramallah, October 20, 2015. (Photo by AFP)

The report also says that more than 5,560 Palestinians have been injured in clashes over the same time span.

“Ultimately, it is for Palestinians and Israelis to choose peace. Our most urgent challenge is to stop the current wave of violence and avoid any further loss of life,” Ban said.

Elsewhere in his remarks, the UN secretary general said the Israeli settlement activities in the occupied territories are illegal and amount to one of the main factors in escalating violence.

Ban said “the only way to end the violence is through real and visible progress toward a political solution, including an end of the occupation.”

For his part, the Palestinian president warned Israel that Palestinians will no longer exercise restraint if Tel Aviv continues its aggression.

“The continued occupation and aggression against Christian and Muslim holy sites in East Jerusalem, particularly against al-Aqsa, opens the door to a religious conflict, which has unfortunately started,” Abbas said, adding, “We don’t want it and we are warning over its consequences.”

Israeli forces order a Palestinian man to lift his shirt as they check him at a checkpoint before he is allowed to exit the Arab neighborhood of Issawiyeh in al-Quds (Jerusalem), October 20, 2015. (Photo by AP)

Abbas urged the international community to help Palestinians against the ongoing crimes by Israeli settlers.

The latest wave of tensions in the occupied Palestinian territories was triggered by the Israeli regime’s imposition in August of restrictions on the entry of Palestinian worshipers into the al-Aqsa Mosque.

Palestinians are also angry at increasing violence by illegal Israeli settlers, who frequently storm the al-Aqsa Mosque. Palestinians say the Tel Aviv regime seeks to change the status quo of the compound.

Israel has rejected a proposal for international observers to be deployed to the al-Aqsa compound.