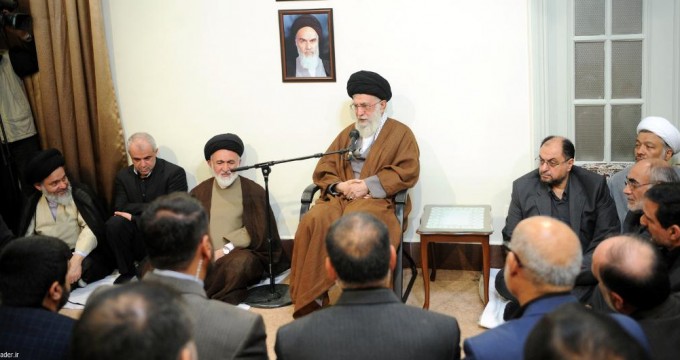 Supreme Leader: This year’s Hajj catastrophe should not be forgotten

Tehran, Oct 19, IRNA – Supreme Leader of the Islamic Revolution Ayatollah Seyyed Ali Khamenei said on Monday that the bitter catastrophe in this year’s Hajj prilgrimage should not be forgotten and should be assessed as among Divine tests.

Speaking to officials in charge of this year’s Hajj pilgrimage on Monday, the Supreme Leader sharply criticized the silence of governments mainly the Western ones and the so-called human rights organizations on the tragedy.

This very deplorable incident should not be forgotten and the country’s foreign diplomatic apparatus and Hajj organization are responsible to follow up the issue seriously, Ayatollah Khamenei said.

The Saudi government is responsible for the deaths of some 7,000 Muslims during this year’s Hajj rituals in Mina, underlined the Supreme Leader adding that regretfully, it was only the Islamic Republic of Iran that publicized the issue and even those countries whose pilgrims were among the victims of this catastrophe did not voice any protest.

It is among duties of Iran’s diplomatic apparatus to communicate with other countries to underline the importance of the event and study ways of preventing the reoccurrence of such incidents in the future, Ayatollah Khamenei said.

Early evidences indicate that the negligence of the host country was the root cause of the catastrophe, Ayatollah Khamenei said, adding that although this is not a political issue thousands of Muslims lost their lives during Hajj rituals in Mina.

‘If the so-called advocates of human rights were sincere in their allegations, they should have called for Saudi Arabia’s accountability, compensation of losses, giving assurances that such incidents would not happen again in the future and punishment of those behind the catastrophe,’ said the Supreme Leader.

It is among responsibilities of the Hajj Organization to call for compensation and pursuing the issue, said the Supreme Leader, adding that it should not be forgotten and even should be publicized at international gatherings by the Western governments and the so-called human rights organizations.

Prior to Supreme Leader’s remarks, his representative to Hajj Organization reported on this year’s Hajj rituals and separate incidents which claimed lives of many Muslims due to mismanagement and incapability of Saudi officials.