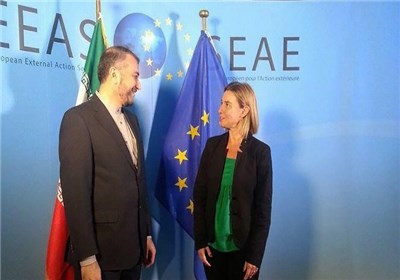 The gathering took place as part of the Iranian diplomat’s visit to Belgium to confer with the EU officials on the Middle East issues, particularly the situation in Syria.

Back in September, the European Union External Action Service said Iran and the EU are to start high-level talks on the bilateral, regional and international issues before the end of 2015.

Also in July, Mogherini paid a visit to Tehran days after Iran and the Group 5+1 (Russia, China, the US, Britain, France and Germany) managed to finalize the text of a lasting deal over Tehran’s nuclear program.

Mogherini had announced that implementation of the JCPOA will have far-reaching effects on Iran, its ties with Europe and the international community and also on the Middle East region.

The EU foreign policy chief coordinated the nuclear diplomacy with Iran on behalf of the six powers (also known as the P5+1 or E3+3).