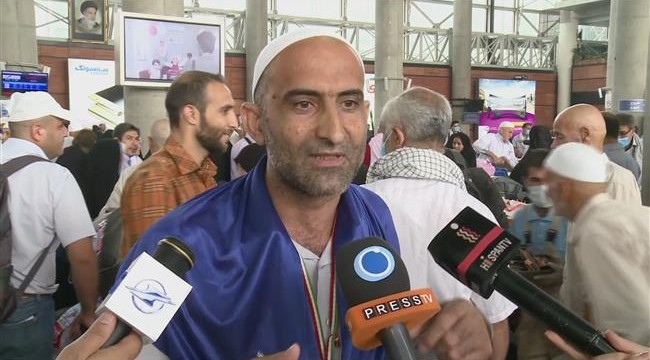 Riyadh must be held accountable for Mina crush: Iranian survivors

The Iranian survivors of the recent crush outside the holy city of Mecca, which is estimated to have claimed the lives of thousands of pilgrims, say Riyadh should be held to account for the disaster, Press TV reports.

Many in the first group of Iranian pilgrims who returned home late Monday said the responsibility for the deadly incident in the Mina region of Mecca lies with the rulers in Riyadh.

“The mismanagement of the Saudi officials has lead to the occurrence of such deadly incidents,” an Iranian woman (pictured below) told Press TV, adding, “If Saudi officials had paid more attention to the lives of pilgrims and rushed to the help of those who had been caught up in the stampede, the death toll had been much lower, but they did not react properly. They should be held accountable.”

The crush happened last Thursday when two large crowds of pilgrims were directed to move toward each other from opposite directions in Mina.

Iran’s Hajj and Pilgrimage Organization has said that 228 Iranians lost their lives in the crush and 246 more are still missing. Saeed Ohadi, the head of the organization, has said the number of the Iranian victims is expected to rise.

Some 64,000 Iranian pilgrims took part in the year’s Hajj pilgrimage.

Ohadi has estimated that the total death toll from the crush could stand at around 4,700 due to the huge scale of the incident, according to ISNA. However, the latest overall fatality figure released by Saudi Arabia’s Health Ministry stands at only 769.

The Mina crush and a number of other recent deadly incidents during Hajj rites have reignited the debate on Riyadh’s competence to manage the annual Islamic pilgrimage.

On September 11, a crane collapsed at the Grand Mosque of Mecca, killing over 100 people. Hundreds of people were also injured. According to the figures released by Iran’s Hajj and Pilgrimage Organization, 11 Iranian pilgrims were among the deceased and 32 of the injured were also Iranian nationals.

“I witnessed the two incidents, the stampede and the collapse of a massive construction crane onto Mecca’s Grand Mosque. When the stampede occurred, there was no drinking water on the ground. If the victims had been given some water to refresh, things would have been better. Saudi Arabia should be held accountable at the international court,” said another Iranian (pictured below).

‘No permission for Saudi Arabia to bury Iranian victims’

Meanwhile, Iranian Deputy Foreign Minister for Arab and African Affairs Hossein Amir-Abdollahian said the bodies of over 700 African victims have so far been buried in Saudi Arabia, but stressed that the Islamic has not issued any permission for the Saudi authorities to bury the Iranians who lost their lives in the Mina tragedy.

“No permission has been given to Saudi Arabia for the burial of Iranian victims,” and the families are currently waiting to learn about the fate of the missing and receive the bodies of those killed, he said.