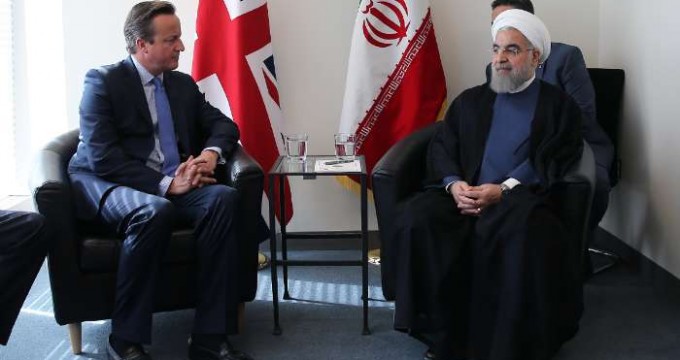 New York, Sept 29, IRNA – Iranian President Hassan Rouhani in a meeting with British Prime Minister David Cameron in New York underlined the need for precise implementation of all parts of the Joint Comprehensive Plan of Action (JCPOA), including removal of sanctions.

‘The Islamic Republic of Iran is ready to implement it commitment as brought in the JCPOA and the other side should also do its best to implement the same,’ the Iranian president said during the meeting with Cameron on the sidelines of the UN General Assembly meeting in New York on Monday.

‘The other side should take the necessary measures needed for adopting the bylaws in all fields, specially removal of sanctions, concurrent with the implementation by Iran,’ he added.

President Rouhani, meantime, pointed to Tehran-London relations, and said, ‘The reopening of the two countries embassies will be a suitable start for the expansion of mutual cooperation.’

Cameron, for his part, reiterated that London would fulfill all its duties concerning the JCPOA, and said, ‘We are assured that the other sides will also fulfill their duties.’

He also pointed to London-Tehran relations, and said, ‘I hope that I could have proven my good will by helping to the finalization of the JCPOA, the visit of the British Foreign Secretary Phillip Hammond to Tehran, the reopening of the embassies and sending trade delegations to Tehran.’

Late in August, Hammond arrived in Tehran at the head of a high-ranking delegation to meet the Iranian officials and reopen the British embassy after four years of strained relations.

Upon arrival, he directly went to the British embassy and announced resumption of the mission’s tasks in an official ceremony.

Hammond is the first British Foreign Secretary to visit Iran in the last 12 years.