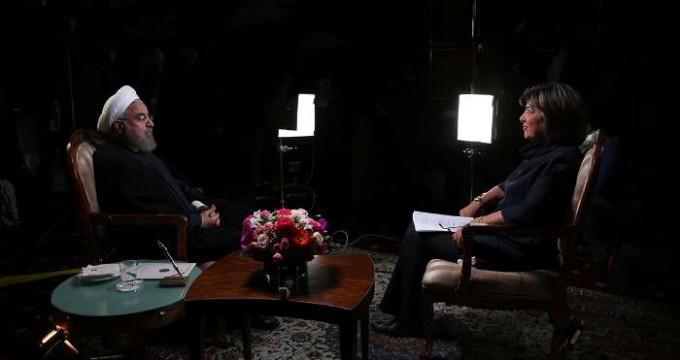 “In Syria, when our first objective is to drive out terrorists and combating terrorists to defeat them, we have no solution other than to strengthen the central authority and the central government of that country as a central seat of power.”

“So I think today everyone has accepted that President Assad must remain so that we can combat the terrorists.”

“However, as soon as this movement reaches the various levels of success and starts driving out the terrorists on a step-by-step basis, then other plans must be put into action so as to hear the voices of the opposition as well.”

Since the beginning of the Syrian civil war, Iran has put its full weight behind Bashar al-Assad’s regime, supporting him politically, financially and militarily.

Russia, Iran and al-Assad are united in their opposition to ISIS. But al-Assad, since the beginning of the conflict, has used the term “terrorists” to refer to groups that the United States and other Western powers would consider part of the legitimate opposition.

The U.S. appears to be switching tactics in an effort to end the Syria war, by involving Iran in negotiations. But Rouhani said there are no direct talks with the United States.

“Iran, with the United States, does not have any direct talks vis-a-vis Syria. But Iran simultaneously with the European Union, as well as other countries, does have talks regarding Syria,” he said through an interpreter.

“And those parties to the talks with Iran about Syria are in direct conversations with the United States as well. So perhaps not direct, but there are talks.”

The conflict may be on the verge of its most significant development yet, as Russia moves heavy military equipment and personnel into the country. Iran and Russia, like the U.S., are fervently opposed to ISIS, but Russia’s intentions are so far unclear.

Rouhani said the United States, which has expressed outrage at Russia’s move, should not be surprised.

“The few times that we have met with (Russian President Vladimir) Putin, he spoke in quite a bit of detail about this very issue,” Rouhani said. “Russia has decided to undertake a much more serious level of operations in combat against the terrorists in Syria.”

“And during the last meeting he did announce that some countries such as Iran, Iraq, or Russia must form a semi, a quasi, coalition in order to assist in this fight against Daesh or ISIS and other groups resembling it.” Daesh is the Arabic acronym for ISIS.

“And he told me that he had even spoken with Mr. Obama about this topic, and he would like to renew his commitment to the fight and the defeat of Daesh or ISIS.”

“And he told me, President Putin said, that Mr. Obama welcomed that analysis and that plan. So even previously the United States of America was made aware.”