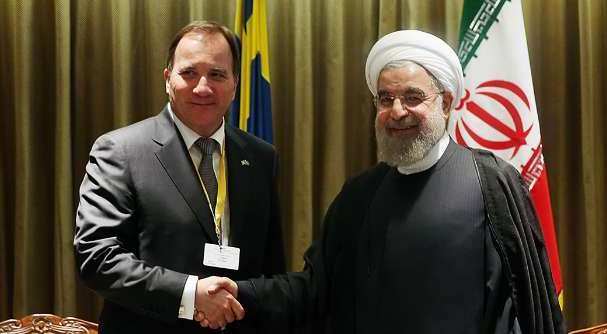 New York, Sept 26, IRNA – President Hassan Rouhani said Iran has no limitation to expand its ties with Sweden, adding that deepening of relations between Tehran and Europe can strengthen regional security.

President Rouhani made the remarks in a meeting on Friday in New York with Prime Minister of Sweden Stefan Lofven during which he supported bilateral cooperation in economic and technological fields.

‘The visit by a Swedish economic delegation to Tehran can provide the oppotunity for private sectors in both countries to become familiar with capacities of the other side,’ he said.

Expressing his gratitude over the sympathy of Sweden on death of Iranian pilgrims in Saudi Arabia, President Rouhani also urged cooperation in the fight against terrorism worldwide.

‘Deepening of our relations with the western countries and the European Union can be a giant step for strengthening of the regional security,’ he added.

Lofven referred to the upcoming visit by the minister of industry of Sweden to Iran and said Stockholm is interested in developing its industrial and trade ties with Iran as an important and influential actor in the region.

The Swedish premier said terrorism is a global problem, fighting it demands joint measures, and Sweden is interested in cooperating with Iran in anti-terrorism.

‘We are ready to open a new chapter in our bilateral relations with Iran,’ he said.

President Rouhani is in New York to take part at the United Nations General Assembly and the UN Sustained Development Summit.