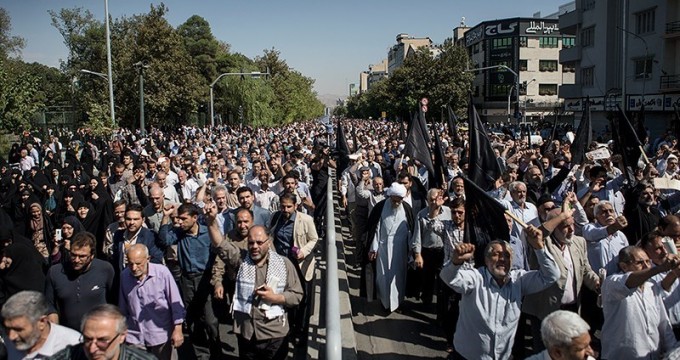 Tehran, Sept 25, IRNA – Iranian protesters in rallies staged after the Friday prayers across the country condemned the Saudi misstatement as real cause for the deadly Thursday Mina disaster.

In Tehran, the protesters carried out placards which read ‘Down with Saudi Arabia’.

The protesting Iranians accross the country also condemned the Saudi-led aggression against Yemen carrying posters, placards and banners in support of the oppressed Yemeni people, the porest Muslim nation even before the Riyadh-led deadly attaks that have thus far lasted more than 9 months.

Leader of the Islamic Revolution Ayatollah Seyyed Ali Khamenei has declared three days of national mourning following the deaths of several hundred Hajj pilgrims, including Iranians, in the holy city of Mecca.

According to the latest reports, 2000 people have got killed in the Hajj stampede in which 85 Iranians have been injured, 131 have been killed and 365 people are still missing.