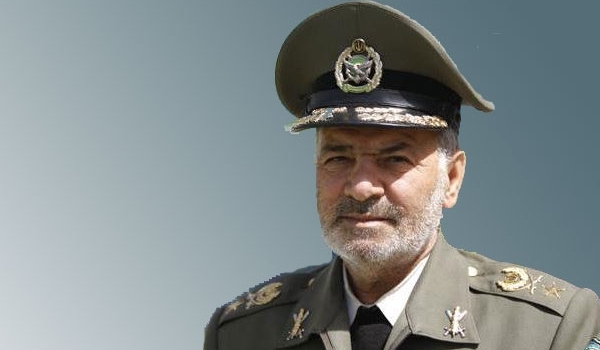 TEHRAN (FNA)- Deputy Chief of Staff of the Iranian Armed Forces for Operations Brigadier General Mostafa Salami underlined Iran’s military preparedness to give a crushing response to any possible threat to the country.

“The Islamic Republic of Iran is no threat to its neighbors but it stands against threats mightily,” Salami said, addressing a ceremony in the Central province of Golpayegan on Wednesday marking the start of the Sacred Defense Week, commemorating Iranians’ sacrifices during the 8 years of the Iraqi-imposed war on Iran in 1980s.

“Today, the Armed Forces, including the Islamic Revolution Guards Corps (IRGC) and the Army, are the most powerful armed forces in the world and we have worked out the needed plans for all possible enemy scenarios,” he added.

His remarks came after the Iranian Armed Forces publicly displayed 12 long-range ballistic missiles for the first time after Tehran and the world powers reached a nuclear agreement and the UN Security Council issued a non-binding resolution which calls for restrictions on Iran’s missile program.

The nationwide parades by various units of the Islamic Republic Army, IRGC, Law Enforcement Police and Basij (volunteer) forces were staged in Tehran and other cities across the country on Tuesday morning.

The parades marked the start of the Sacred Defense Week.

Different units of Iran’s military forces marched in uniform before top Army and IRGC commanders and President Hassan Rouhani in a show of military might and defensive power.

Also the latest military and defense achievements made by Iranian experts were put on display at the parades.

Also, 4 Khalij-e Fars anti-ship ballistic missiles and 4 Hormoz anti-ship and radar-evading missiles with a range of 300km were among other missiles displayed in today’s parades.

The public display of Iran’s long-range ballistic missiles was seen as a defiance of the western states’ demand and resolution 2231 which calls for restrictions on Iran’s missile program.

The resolution was issued after Iran and the world powers reached a nuclear agreement on July 14.

Iranian Defense Minister Brigadier General Hossein Dehqan underlined in August that the country’s defensive and missile capabilities would growingly increase regardless of any foreign pressures and resolutions.

“No element can weaken our resolve in the defensive field,” Dehqan said in an interview with state TV.

“We will design and produce any missiles that we want proportionate to threats and we will conduct drills and tests in due time,” he added.

Dehqan stressed that Iran would further boost the range of its missiles appropriate to possible threats.

He referred to the UN Security Council 2231 resolution, and said Tehran didn’t and would not have any plans to manufacture missiles with the capability of carrying nuclear weapons but it will bolster its defensive capabilities similar to the past.

Defense analysts and military observers say that Iran’s war-games and its advancements in weapons production have proved as a deterrent factor.