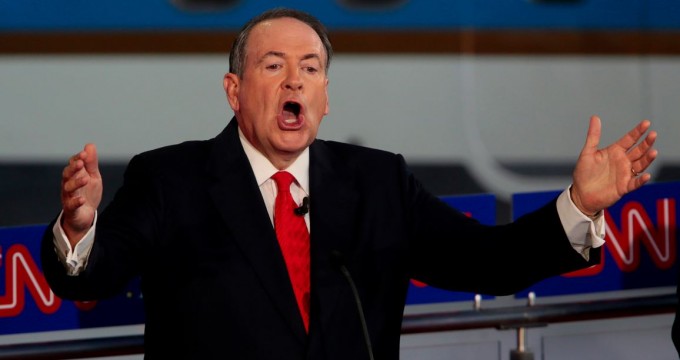 Huckabee: U.S. is giving Iran the equivalent of $5 trillion

Iran is getting a sizeable award for the nuclear deal with the United States — to the tune of $100 billion, presidential candidate Mike Huckabee said at the second Republican debate.

The Iran deal was a big topic at the Sept. 16 CNN debate, held at the Ronald Reagan Presidential Library. Several of the candidates blasted the deal between the United States, Iran and several world powers — including the former governor of Arkansas..

We’ve looked into similar claims before, so we decided to take a look at Huckabee’s version.

It’s true that Iran will reap significant economic benefits from the deal, because many sanctions levied against Iran will be lifted if Iran complies with restrictions on its nuclear program. Iran will have access to a good deal of these funds within several months of the deal being enacted, said Matthew Kroenig, a professor of international relations at Georgetown University.

Huckabee made it sound as if the United States is giving some kind of subsidy or compensation. But the money already belongs to Iran; Iran just hasn’t been able to access it. In similar claims by other candidates and officials, the $100 billion figure has referred to the dollar amounts of Iran’s foreign assets that could be unfrozen when sanctions are lifted. An example is money Iran earned from selling oil but is held by a foreign bank.

It also includes the billions of dollars Iran has lost in revenues and opportunity costs because the country has not been able to fully participate in the global marketplace, said Michael Malloy, a law professor at University of the Pacific McGeorge School of Law and an expert on economic sanctions, in a prior interview with PolitiFact.

Estimates of the value of Iran’s foreign assets start as low as $25 billion, and they run as high as $150 billion. Most experts we’ve interviewed on this question peg the amount of unfrozen assets at about $100 billion, but no one is 100 percent sure of the amount.

Iran has financial obligations other than the sanctions, so even if all the sanctions are lifted, Iranian officials won’t suddenly have all of these assets at their disposal. For example, Iran owes billions to China for infrastructure projects. The lower estimates take into account restrictions on the money other than the sanctions, said Richard Nephew, an expert on economic sanctions at Columbia University’s Center on Global Energy Policy, also in a prior interview.

The Obama administration has said that after Iran pays its outstanding financial obligations, it will have about $56 billion at its disposal.

How does this translate into $5 trillion in America?

Based on a prior fact-check, we can deduce that Huckabee is comparing the Iranian and U.S. economies based on gross domestic product, the standard measurement of an economy’s size.

According to the World Bank, Iran’s economy is $415 billion. So the $100 billion in sanctions relief amounts to about 25 percent of the economy. The United States’economy is about $17 trillion. Twenty-five percent of that is $4.25 trillion — a little low but not too far off from Huckabee’s $5 trillion.

It’s not a perfect measurement, said Tara Sinclair, an economics professor at George Washington University, who said she would be more interested in comparing the two in terms of GDP per capita.

Though, “I do think it gives an interesting comparison of the scale,” Sinclair said of Huckabee’s claim.

Huckabee’s $100 billion figure is one of the most commonly cited estimates of how much the Iranian economy will reap from sanctions relief under the Iran deal, though no one is fully certain of the amount. But he gives a misleading impression of the transaction by implying the United States is giving the money to Iran when it would just unfreeze the assets.

We rate Huckabee’s claim Half True.

This article was written by  Lauren Carroll for politifact on Sept. 16, 2015.