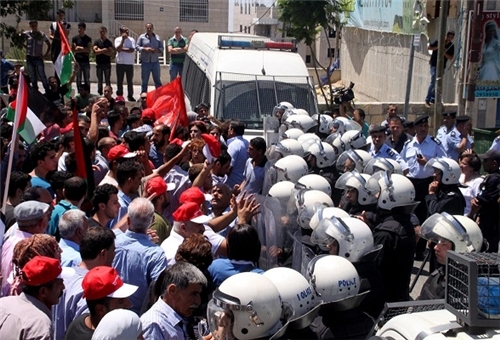 Palestinians and Israel Police clashed Tuesday morning at Jerusalem’s Temple Mount compound in the third day of consecutive violence at the flashpoint site, with Arab youths reportedly attempting to use violence to block access to the complex.
The violence came as Israel marked the Jewish new year and a day after an Israeli man died in an incident that could be the result of stone throwing.
Police spokeswoman Luba Samri said police entered the Al-Aqsa Mosque compound early Tuesday morning to disperse a group of protesters who were throwing rocks and firecrackers. She says the crowd was dispersed and no one was injured or arrested.
According to the police, the Palestinian youths had barricaded themselves within the mosque overnight with the intent of locking horns for security forces, stocking up on stones and bricks, and using ropes and bookcases to block its entrance and prevent the police from closing the mosque doors to permit Jewish and non-Muslim visitors to the site.
According to the police, as the site opened Tuesday morning, the Palestinians began throwing stones at the Mughrabi-Bridge, the entrance for non-Muslim visitors, prompting a rare police raid, much like the one that took place on Sunday, as security forces attempted to permit Jewish visitors to the site in honor of Rosh Hashanah.
Police managed to remove the makeshift blockades set up at the mosque and close its doors, and the site is now open to visitors.
The compound, known to Jews as the Temple Mount and as the Noble Sanctuary to Muslims, was captured by Israel from Jordan in 1967, and Jewish worshippers have been allowed to visit — but not pray — there. Muslim authorities view the presence of Jewish worshippers and Israeli police as a provocation and accuse Jewish extremists of plotting to take over the site.
In wake of Monday’s violence, Jordan’s King Abdullah II, the site’s custodian, issued a rare warning to Israel, saying the kingdom was “very concerned and angered with the recent escalation’s in Jerusalem, specifically in Al-Aqsa Mosque” in Jerusalem. Jordan, which has a peace treaty with Israel, administers Muslim religious affairs at the site.
The U.S. State Department on Monday voiced concern about violence at the holy site. “The United States is deeply concerned by the increase in violence and escalating tensions surrounding the (al-)Haram al-Sharif/Temple Mount,” said State Department spokesman John Kirby. “We strongly condemn all acts of violence. It is absolutely critical that all sides exercise restraint.”
On Sunday, police clashed with Palestinians who barricaded themselves inside the Al-Aqsa Mosque in Jerusalem’s Old City and threw rocks and firecrackers.
Prime Minister Benjamin Netanyahu’s Office announced on Monday evening that he would fast-track legislation to set a minimum sentence for stone and firebomb throwing after an Israeli died and several people were injured after attacks by rock-throwing Palestinians.