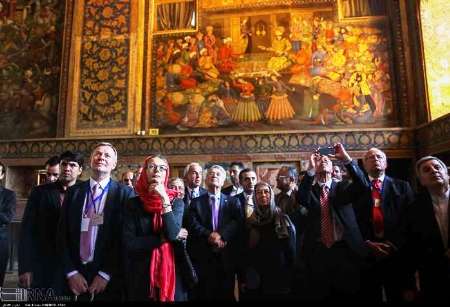 Isfahan, Sept 9, IRNA – Austrian President Heinz Fischer wrapped up his one-day tour of Isfahan following his state visit to Iran and left to Vienna on Wednesday.

During his tour of the city, Fischer visited cultural heritage monuments and world-known touristic attractions of Isfahan.
‘One of the interests of mine and my wife during my state visit to Iran was paying a visit to Isfahan, and I am happy that Iranian officials arranged it for us,’ he told reporters prior to his departure.
The Austrian president said that in addition to negotiating trade, energy and business ties during his visit, cooperation in the field of tourism was also discussed with Iranian officials.
Heading a 240-member delegation, Fischer arrived in Tehran on Monday and met top-ranking leadership of the Islamic Republic.
He was upbeat over cooperation agreements signed between Iranian and Austrian officials and business people during his stay.
He is the first head of state of a Western country to visit Iran in the wake of the nuclear agreement reached between Iran and P5+1 group of world powers last April in Vienna.