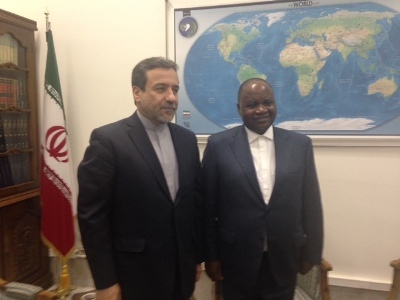 Tehran, Aug 30, IRNA – Deputy Foreign Minister for Legal and International Affairs Abbas Araqchi said it is the duty of the world to facilitate return of refugees to their countries so that they can play a role in reconstruction of their homelands.

He made the remarks during a meeting on Sunday with the visiting head of the Executive Committee of UNHCR Pedro Commisario Afonso in Tehran.
Commisario is visting Iran on the verge of UN refguee agency’s meeting of high-ranking officials on Afghan refugees to become familiar with their condition in Iran.
‘The principle policy of the Islamic Republic of Iran in the field of refugees is their voluntary return to their countries. We believe that Afghan refugees can prove efficient in reconstruction of their motherland based on the experience and
expertise they have gained in Iran,’ said Araqchi.
‘The only way to Afghanistan’s success is reconstruction,’ he added, ‘Afghanistan’s development will deny groups such as Taliban, Al-Qaeda and Daesh of the background for terrorist activities.’
Referring to Iran’s hosting of refugees from regional countries specially the Afghan refugees for the last three decades, he said, ‘Even when we faced problems of Saddam’s imposed war against Iran and the unjust sanctions, we hosted millions of refugees in our country.’
He termed the upcoming UNHCR meeting on Afghan refugees in Geneva ‘a right decision at the right time’ and said Iran is ready to take part at the event and contribute to its successful convention.
Commisario hailed Iran’s generous hosting of Afghan refugees for more than three decades as a shining and outstanding example of assistance and support for the international community.
On the UNHCR meeting in Geneva, he said, ‘By focusing on Afghan refugees, it will attract the attention of international community once again to finding sustainable solutions for their return to their country and their incorporation with the Afghan society.’
The meeting, he added, will also provide the opportunity that the world will become familiar with the assistance and services provided to Afghan refugees by hosting countries specially Iran.
The UNHCR Executive Committee head also urged Iran to activly participate in the Geneva meeting.