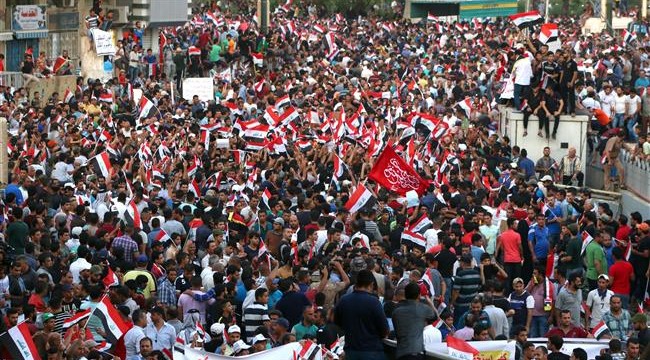 Protesters rally against corruption in Baghdad

Thousands of people took to the streets in the Iraqi capital, Baghdad, protesting against corruption and poor city services across the country.

Security forces arrested several people who were intimidating others during the demo and stabbing protesters. They had also raised a false bomb alarm.

Protesters have been staging numerous rallies over the past weeks, demanding changes, including reforms in the government to fight graft, and better basic services like water and power.

Power outages leave just a few hours of electricity per day during the hot summer heat in the country.

Prime Minister Haider al-Abadi has responded to the public gatherings and a call by top Shia cleric, Grand Ayatollah Ali al-Sistani, with a reform package aimed at curbing corruption and streamlining the government.

Iraq’s parliament has approved Abadi’s reform plan and the prime minister has begun changes which include eliminating a number of high governmental posts, a revision of the government’s pay scale, reopening streets closed to the public and reducing the number of body guards for senior officials.

His actions have met with resistance in some circles, raising questions about the legality of his reform measures.

“I will not back down,” al-Abadi vowed in televised comments this week. “There is no going back on reforms. Our political system needs popular pressure to reform itself,” said the Shia prime minister.

The deteriorating living conditions in Iraq is widely believed to be the result of Washington’s invasion of the country 12 years ago to topple the former regime.