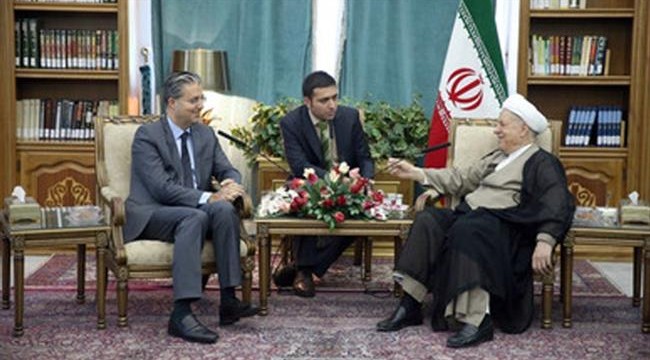 The chairman of the Expediency Council met with Hakan Takin in the Iranian capital on Wednesday, calling on Ankara to watch out for the Takfiris.

“It is not unlikely for Daesh to have built bases for itself in Turkey” since its emergence in the Middle East, Hashemi said, likening the regional situation to “poison” that can harm the Turkish society.

The Takfiri terrorists have been wreaking havoc in Syria and subsequently Iraq, after their infiltration into the region through Turkey and Jordan.

The senior Iranian politician said Turkey’s “important parties” should be “serious” in running the country and put “national interests” on top of their agenda.

He also commented on Tehran-Ankara ties, warning, “It is evident that (hidden) hands are at work to ruin relations between the two states.”

Rafsanjani called for more bilateral cooperation, noting that it would “strengthen and sustain internal security” in both courtiers.

In response to Takin’s question regarding Tehran’s ties with Saudi Arabia, Hashemi said “Iran has declared several times that it seeks to expand relations in an atmosphere of mutual respect especially with Muslim and neighboring states.”

“In practice, we have proven that we cause no trouble for the regional states and they (Saudis) should not be deceived by the Zionists.”

The Turkish envoy, for his part, said regional powers should “negotiate” despite differences, which he described as “natural”, otherwise it would pave the way for the “presence and intervention of foreign forces in the region.”

Turkey is currently engaged in battles with Kurdistan Workers’ Party (PKK) militants in Iraq and has been targeting alleged position of the Daesh Takfiris in Syria, which has made the east of the country relatively insecure.

On August 7, an Iranian bus was attacked in the Dogubayazit district of the eastern Agri province and its driver was fatally shot.

An Iranian truck carrying bitumen was also set on fire in the region late on August 11.

A senior Iranian Foreign Ministry official voiced Tehran’s concerns over the situation there, specifically in regard to terrorist attacks against Iranian nationals and vehicles, in a Wednesday meeting with Takin.

“We are also concerned… and pursue the matter seriously,” said the envoy, vowing to declare the results immediately.