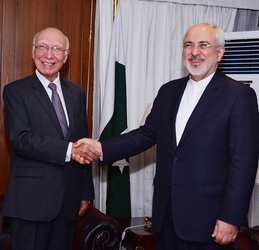 During the meeting, Zarif and Sartaj Aziz discussed the ways for expanding mutual cooperation in areas of mutual interest, and the two sides also underlined the need to solve the regional crises through political means.

The Iranian and Pakistani foreign minister also conferred on the trade, economic and energy cooperation with Sartaj Aziz.

The two sides also called for taking big and serious strides to broaden mutual cooperation, especillay for enhancement of economic relations after the nuclear agreement reached between Iran and the world powers in Vienna.

Zarif who is on a one-day visit to Pakistan earlier today met Pakistani Prime Minister Mohammad Nawaz Sharif in Islambad.

During the meeting in Islamabad, Zarif and Sharif discussed mutual cooperation and regional developments.

The Iranian foreign minister and Pakistani prime minister underlined the need for consolidation of all-out ties between Tehran and Islamabad to further broaden mutual cooperation, especially in the post-nuclear deal era between Iran and the six world powers.

Speaking to reporters upon his arrival at Benazir Bhutto International Airport on Thursday morning, Zarif described Iran’s ties with Pakistan as a friendly and neighboring country very important, and said that during his visit to Islamabad he will discuss problems and issues that the region is facing with Pakistani friends.

He said that one of the most important objectives of his visit to Pakistan is exchanging views on different subjects, especially economic cooperation.

‘We are trying to remove the problems that have been created for both countries due to the western-imposed sanctions,’ Zarif said.

‘The Islamic Republic of Iran deems as highly important its relations with the neighboring countries and Pakistan is a friend, neighbor and very close to Iran; we have very solid relations with that country in different fields, especially in the cultural area,’ Zarif added.

The Iranian foreign minister, meantime, pointed to regional problems, and said, ‘In view of the fact that some regional countries, including Yemen, Afghanistan and some other regional states are facing different problems, I will consult with the Pakistani allies in this regard as we hope that these consultations will be in the interest of both countries as well as it would benefit regional peace and security.

The Iranian foreign minister will meet senior Pakistani officials during his one-day visit to Pakistan.

Zarif and Sartaj Aziz will also attend a joint press conference in Islamabad.