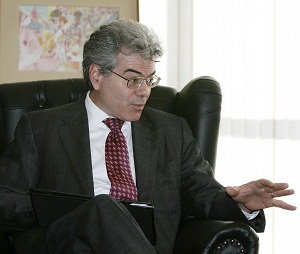 WASHINGTON — When the bipartisan advocacy group United Against Nuclear Iran decided last week to mobilize opposition against the nuclear deal with Tehran, Gary Samore knew he could no longer serve as its president.

The reason: After long study, Mr. Samore, a former nuclear adviser to President Obama, had concluded that the accord was in the United States’ interest.

“I think President Obama’s strategy succeeded,” said Mr. Samore, who left his post on Monday. “He has created economic leverage and traded it away for Iranian nuclear concessions.”

As soon as Mr. Samore left, the group announced a new standard-bearer with a decidedly different message: Joseph I. Lieberman, the former senator from Connecticut and the new chairman of the group.

“It’s a bad deal,” said Mr. Lieberman, who believes that lawmakers have a chance to block the accord even if that means overcoming a presidential veto. “If the Iranians are pressured more, I think we can get a better agreement.”

To get that message across, the group has announced a multimillion-dollar television and digital media campaign.Yet it is Mr. Samore’s quiet departure as president of the organization that is resonating among the small community of experts who have pored over the agreement.

Mr. Samore helped establish the organization in 2008, well before serious nuclear talks were underway. The aim was to strengthen the international economic sanctions against Iran, which Mr. Samore was convinced had been mounting a clandestine effort to develop nuclear weapons.

Mr. Samore, who traveled to Iran in 2005, is well known to the Iranians. At a dinner that Mr. Samore attended during a meeting of the United Nations General Assembly in 2013, Mohammad Javad Zarif, Iran’s foreign minister, repeated assurances that Iran’s nuclear efforts were entirely peaceful.

“We are all united against a nuclear Iran,” he quipped, as he cast a glance at Mr. Samore.

Mr. Samore, who now runs the Belfer Center for Science and International Affairs at Harvard, initially said that the chances of a successful negotiation were dim. But after the framework of an accord was announced in Lausanne, Switzerland, in April, he praised it as a good first step.

Mark D. Wallace, the chief executive of the group and a diplomat in the George W. Bush administration, said that the organization’s members had sought to keep an open mind. But after the final terms became clear, “The opposition was nearly unanimous,” he said.

With that move, it was clear that Mr. Samore needed to move on.

“We had an honest discussion that I wouldn’t be able to continue to serve as president if UANI was going to come out against the agreement, since I support it,” Mr. Samore said.

“Nonetheless, I support the work that UANI has done in the past to strengthen sanctions, and I think they will have a role to play in the future to maintain nonnuclear sanctions if the deal goes forward,” he said. (He will continue to serve on the group’s advisory board.)

Though he backs the accord as the most that can be achieved diplomatically, Mr. Samore is skeptical that the agreement will open a new chapter in American-Iranian relations.

“The best you can achieve with diplomacy is delay in the hope that at some point a new Iranian government emerges that is not committed to developing nuclear weapons,” he said.

And if that leadership does not materialize, Mr. Samore acknowledges that Iran might vastly expand its nuclear enrichment program after core elements of the agreement expire in 15 years.

He is also not convinced that Iran will continue to adhere to the accord once economic sanctions are lifted. Even so, he argues, the accord will put the United States in a stronger position to respond than a congressional rejection would.

“We will have bought a couple of years, and if Iran cheats or reneges we will be in an even better position to double down on sanctions or, if necessary, use military force,” Mr. Samore said. “If I knew for certain that in five years they would cheat or renege, I’d still take the deal.”

This article was written by Michael R. Gordon for the New York Times on Aug.11, 2015.