A look at Iranian newspaper front pages on August 13

The Lebanon and Syria visits of Foreign Minister Mohammad Javad Zarif where he held talks with his hosts over bilateral ties, regional developments and the nuclear deal Iran and P5+1 cut in Vienna in July dominated the front pages of Iranian newspapers on Thursday. The comments of Secretary Kerry on the negative impact of a likely rejection by Congress of the Vienna accord on the US dollar also appeared on the covers of Iranian dailies.

Ettela’at: “The nuclear deal will transform the region,” Foreign Minister Mohammad Javad Zarif said in his meetings with officials in Lebanon and Syria.

“We extend a hand of friendship to our brothers to cooperate in building the region,” the Iranian top diplomat said.

Highlights of Ettela’at newspaper on August 13

Afkar: The Iranian navy will be equipped with guided missile cruisers.

Afkar: “Inclusion of political goals in the country’s defense strategy is a mistake,” said Heshmatollah Falahatpisheh, a former MP. 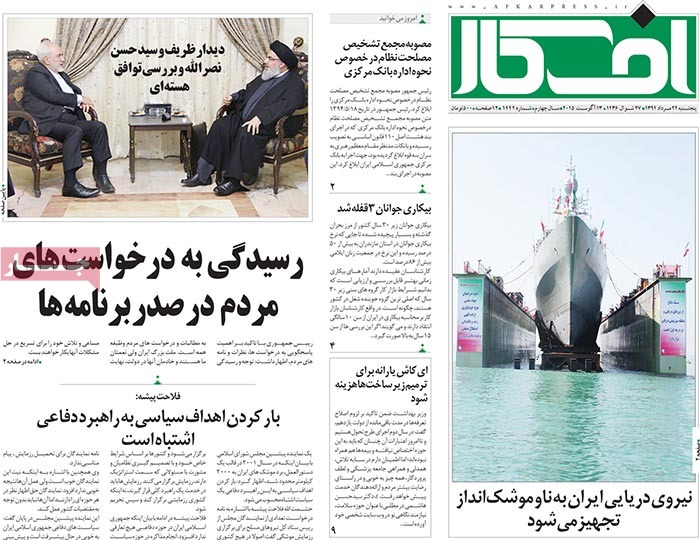 Aftab-e Yazd: “Mahdi Hashemi [a son of the chairman of the Expediency Council] receives no special treatment in prison,” said the judiciary spokesman.

Aftab-e Yazd: The secret to their anxiousness

The daily has taken a look at the reason why some MPs are so eager to have a meeting with Babak Zanjani [a young billionaire who stands accused of fraud and embezzlement when Ahmadinejad was in office].

An MP has said that individuals with managerial positions in the previous administration have played a role in the land grab and that even some of the previous Cabinet ministers own villas in this area. 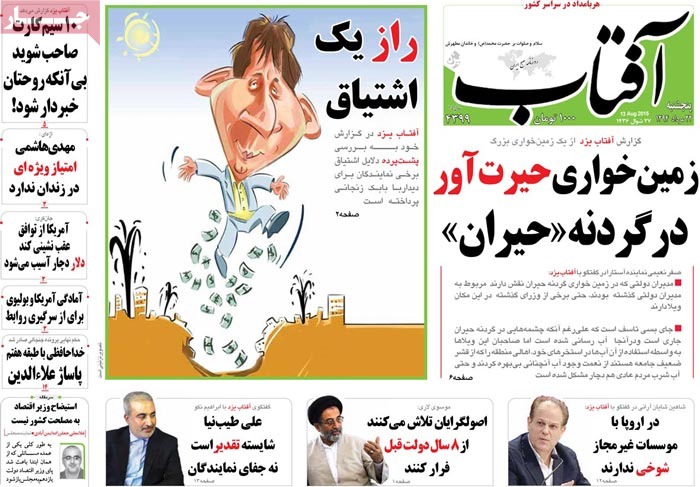 Arman-e Emrooz: Iranian trucks have been attacked on Turkish soil.

Asr-e Rasaneh: The tomb of Cyrus the Great in Pasargadae has been laser-scanned after the launch of a laboratory to restore stone structures. 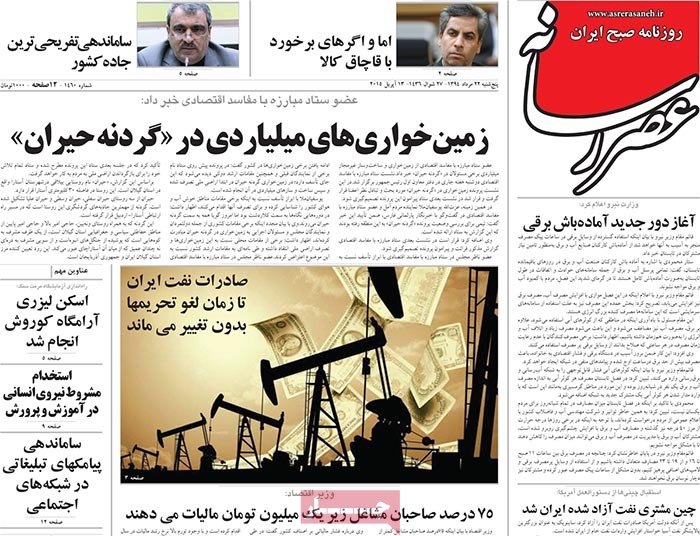 Asrar: Iranians spent some $18 billion on their overseas trips in 2014 alone.

Asrar: “The Joint Comprehensive Plan of Action marks a new beginning between Iran and the United States,” said the secretary of the Expediency Council. 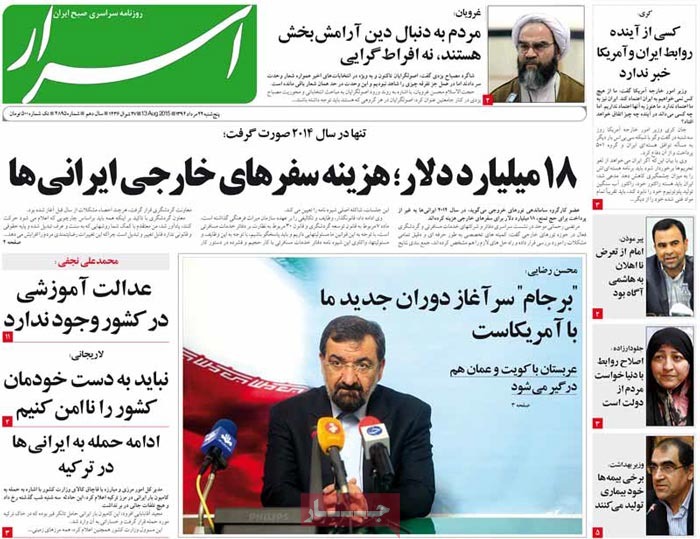 Foreign Minister Zarif arrived in Damascus as shelling in the Syrian capital was ongoing.

Etemad: The Chinese symphony orchestra has arrived in Tehran.

A number of reformists have held a promising meeting with two members of the Guardian Council as rumors swirl that the ticket supported by the head of the reformist government [a reference to Mohammad Khatami] will be disqualified. 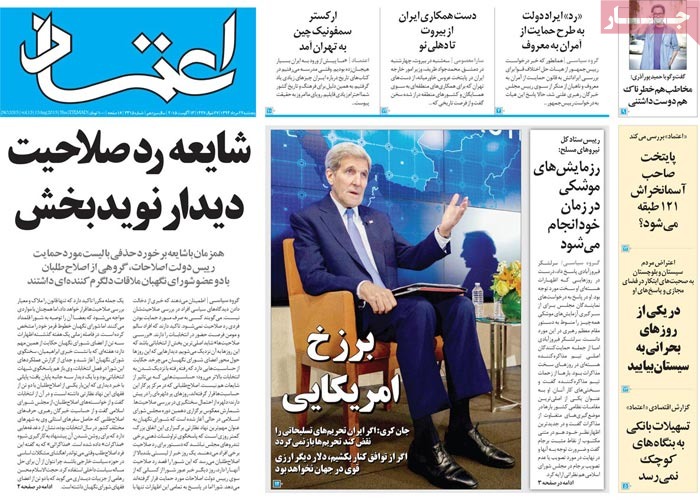 Hemayat: The attorney general has said that fame does not bring immunity from prosecution.

Hemayat: Following a new ruling by the Supreme Administrative Justice Court, a seventh floor of Alaeddin Building in Tehran will be demolished. 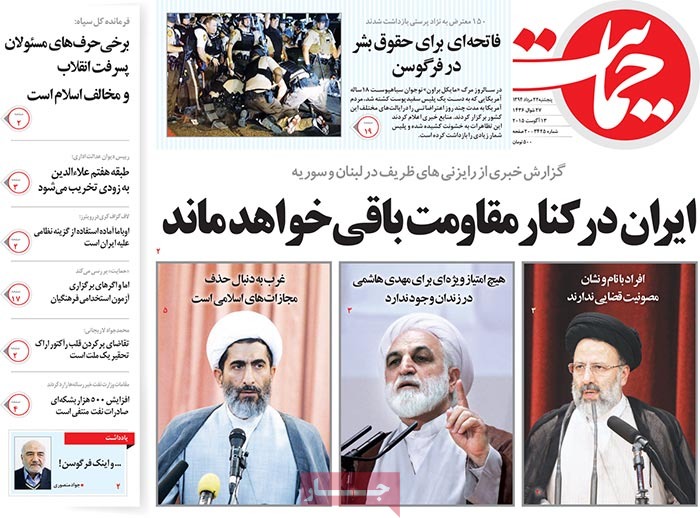 Iran: A dust storm has sent 880 people to hospital emergency rooms in Sistan and Baluchestan. 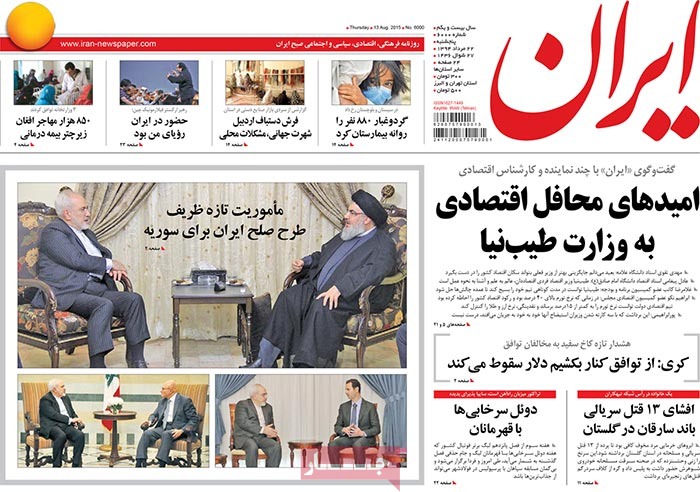 Kaenat: “Some 850,000 Afghan nationals who are in Iran legally will receive health insurance,” said the Iranian health minister. 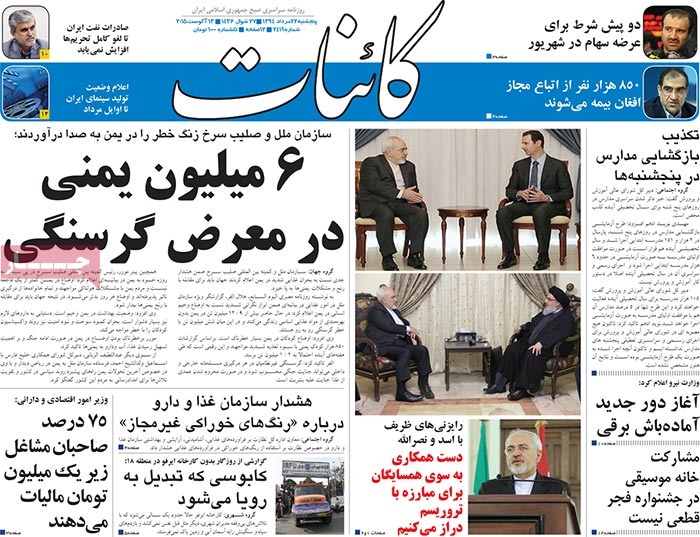 Kayhan: Twelve labs producing meth near Tehran have been shuttered. 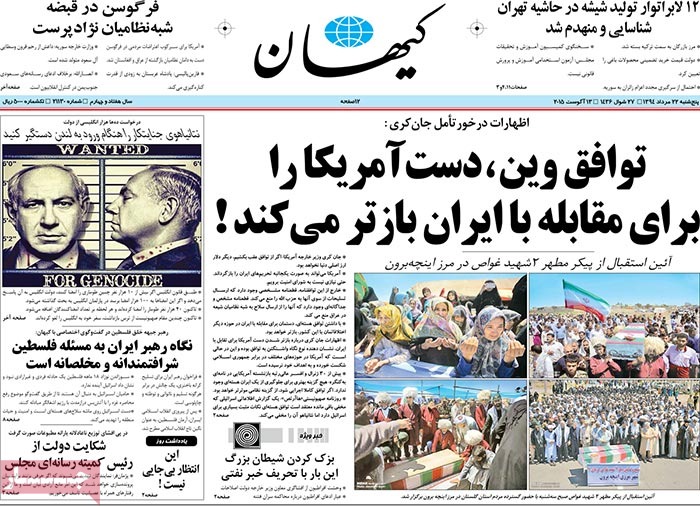 The leader of the Lebanese Hezbollah told the visiting Iranian FM that the nuclear deal between Iran and P5+1 will have a positive impact on the region. 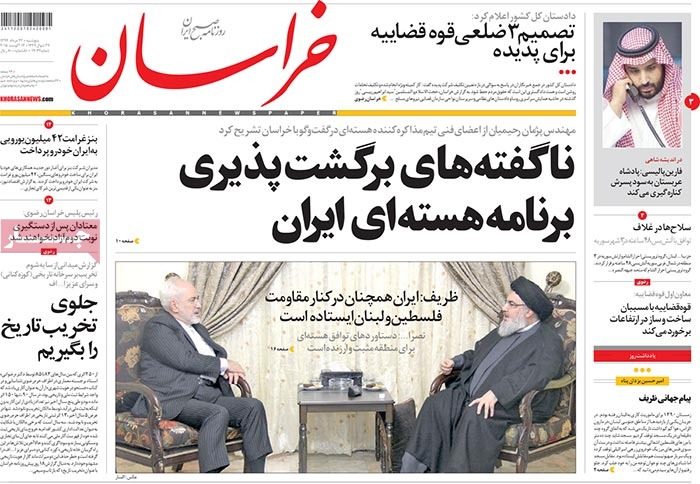 Mardomsalari: Some 40,000 people have signed a petition for Netanyahu to be arrested.

It came ahead of a planned visit to Britain by the Israeli PM. 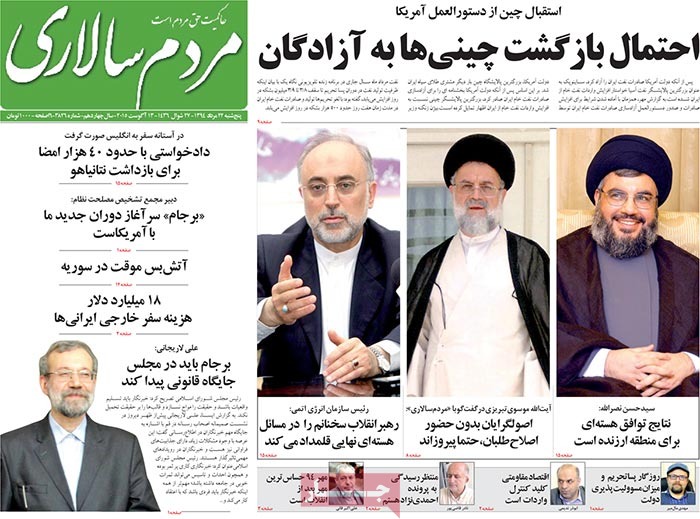 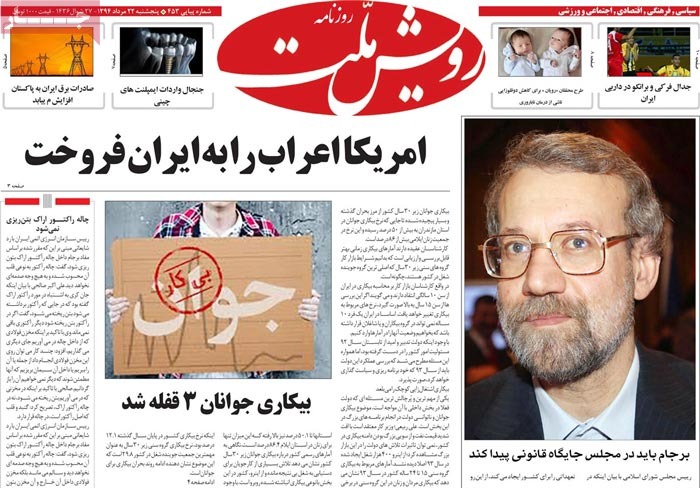 Sayeh: Ministers of the 11th government operating under the shadow of impeachment. 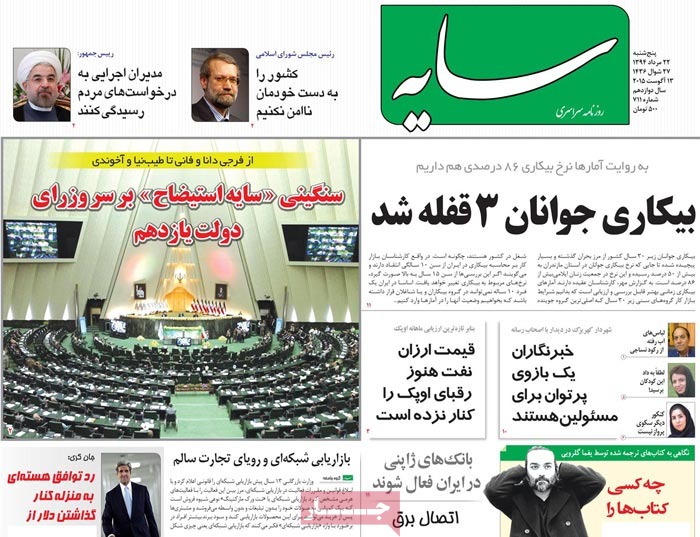 Shahrvand: Turkey is no longer safe, a warning to tourists and businessmen.

Bazargan Border Crossing has been shut down.