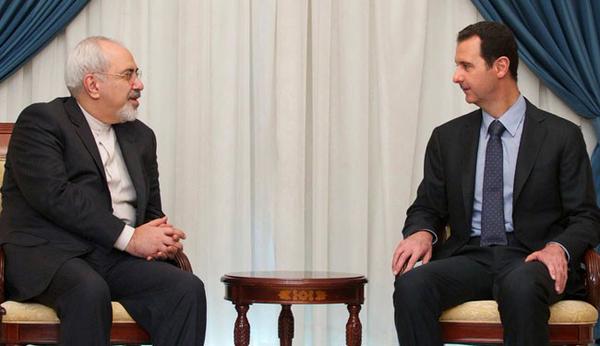 During a Wednesday meeting in Damascus, Zarif and Assad emphasized that the growing wave of terrorism poses a threat to both regional states and other world countries, saying it is necessary for all sides to adopt realistic policies and help cut the support for terror groups.

The two senior officials also discussed ways to settle the deadly crisis, which has claimed over 240,000 lives in Syria since early 2011.

During the talks, Zarif reaffirmed Iran’s firm support for the Syrian nation, saying the Arab country’s fate should be decided by its own people without any foreign meddling.

Assad, in turn, thanked the Islamic Republic’s firm stance on the peaceful settlement of the conflict in Syria.

The Syrian leader also congratulated Iran on the recent breakthrough in its nuclear talks with the P5+1 group, saying the Iranian nation achieved the diplomatic victory through resistance and following the guidelines set by Leader of the Islamic Revolution Ayatollah Seyyed Ali Khamenei.

Following the meeting, Zarif hailed his talks with the Syrian leader as “positive,” saying the meeting was focused on ways to find a political solution to the crisis plaguing Syria.

The Iranian minister further said it is time for regional countries to respect the Syrian nation’s rights and make efforts to fight terrorism and sectarianism.

The Iranian foreign minister is also slated to meet with Syrian Foreign Minister Walid al-Muallem during his stay in Damascus.

Iran’s proposed peace plan on Syria is expected to be on the agenda of talks between Zarif and the Arab country’s officials.

Last year, Iran put forward a peace initiative which is aimed at facilitating the political resolution of the crisis in Syria, while protecting the country’s territorial integrity and independence. The proposal also highlights the Syrian nation’s right to self-determination.

Earlier this month, Iranian Deputy Foreign Minister for Arab and African Affairs Hossein Amir-Abdollahian said the Islamic Republic would submit a revised peace plan to the UN after “close consultations” with Syrian officials.

A head of his trip to Syria, Zarif paid a two-day visit to the Lebanese capital, Beirut, where he held talks with senior officials of the Arab country, including Prime Minister Tammam Salam and Defense Minister Samir Moqbel as well as his counterpart, Gebran Bassil.

Following his talks with Syrian officials, the Iranian foreign minister will make official visits to Pakistan and India.