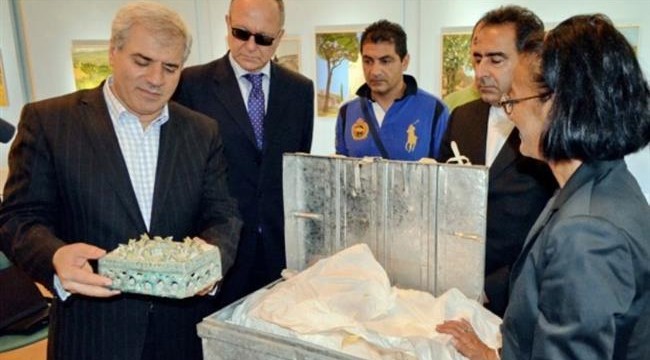 Italy has returned to Iran some 30 stolen artifacts that had been smuggled to the European country during the past 10 years.

After years of hard-fought legal battle with the Italian art authorities, the Iranian legal team managed to win back the stolen artifacts following a restitution order by an appellate court in the northern Italian city of Milan, IRNA reported on Friday.

The haul, comprised of items belonging to Iran’s pre- and post-Islamic era, had been recovered by the Italian art police and was handed over to a representative from the Iranian Embassy in Italy during a ceremony held at the National Museum of Oriental Art in Rome.

Paola Piacentini, from the administrative office of the museum, and Mohammad-Hassan Talebian, the deputy head of Iran’s Cultural Heritage Organization, were present in the ceremony.

The artifacts have been delivered to the Iranian Embassy thanks to the UNIDROIT Convention on Stolen or Illegally Exported Cultural Objects, an international treaty on the subject of cultural property protection signed in 1995 in Rome, Talebian said on Friday. The convention aims to reduce illegal traffic of cultural property by obligating buyers to check the legitimacy of their purchase.

He added that the procedure to transfer the art pieces to the Iranian National Museum would start in an official ceremony scheduled to be held in the Iranian Embassy in Rome in September.

Duilio Cortassa, a lawyer with the Iranian Embassy in Rome, also said that the Italian art police seized the haul of pre- and post-Islamic era artifacts in the northern Italian city of Monza in 2007.