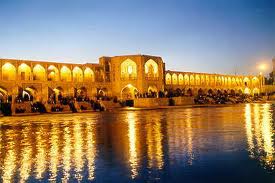 Iran’s tourism is already seeing a resurgence, with foreign hoteliers visiting the country to test the waters for the huge bonanza of an underdeveloped market.

“Foreign investment groups are studying the Iranian tourism market and its growing attractions as well as asking about the investment laws,” he said.

“They believe the Iranian market, given the government’s approach and interaction with the world, is very attractive but the main hindrance is the sanctions.”

More than 12 hotel groups have held discussions with Iranian officials over the past year, with Arab investors having started work in a number of cities because they do not believe in the sanctions, Soltanifar said.

Last year, 11 hotels were built in total across Iran including two in each of the Imam Khomeini International Airport (IKIA) in Tehran, Shiraz and Mashhad and one in each of Urmia, Yazd, Tabriz, Gorgan and Semnan cities, he said.

The UAE-based Rotana has hotel projects in Tehran and in the pilgrimage city of Mashhad. They are expected to be completed from 2015 onwards, including the five-star, 200-key Rayhaan in 2017. Its five-star Espinas Behnood Hotel will open this year in northern Tehran, with 600 rooms.

A number of international operators such as InterContinental Hotels Group (IHG), Hyatt, Hilton and Starwood which operated in Iran before the Islamic Revolution in 1979 have also indicated interest in returning to the country.

Iran plans to annually attract 20 million tourists by 2025 which could generate $30 billion of revenues, Soltanifar has said.

The country is among the world’s top potential tourist destinations with a treasure trove of ancient sites, including 17 places listed by the UNESCO. Tourism, however, is a neglected industry in Iran which has relied on oil exports for decades.

With a population of about 80 million people, the country has an underdeveloped hospitality market. As one of the world’s top 10 countries for archeological and cultural sites, it comes a dismal 132nd and 160th among 180 world countries in terms of tourism industry and revenues.

Head of the Iran Touring and Tourism Investment Company (ITTIC) Mohsen Qarib said in June the country will face a “tsunami” of foreign tourists once a nuclear agreement is concluded and sanctions on the country are lifted.