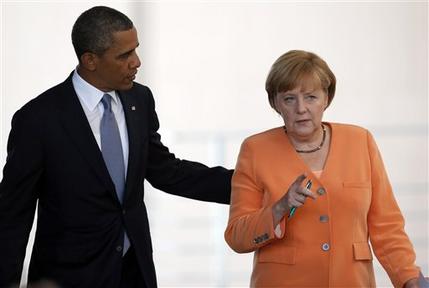 German Chancellor Angela Merkel welcomed US President Barack Obama’s Internet message to the people of Iran, according to a secret National Security Agency (NSA) document published by WikiLeaks on Wednesday.

WASHINGTON (Sputnik) — The top secret US surveillance report was based on communications between Chancellor Merkel and Crown Prince Shaykh Muhammad bin Zayid al-Nuhayyan of the United Arab Emirates in March 2009.

“The German leader… commented that this approach by Washington represents a unique opportunity, one that all should work to make successful.”

Obama’s Iranian New Year video message was probably intended primarily for the people of Iran, Merkel and Muhammad agreed in the bugged conversation, according to the US report.

“In Merkel’s opinion, the Iranian leadership may have been concerned that the message was beamed directly to people over the Internet, compelling it to send its own message.”

Muhammad agreed with Merkel that Obama’s Internet communications initiative offered an opportunity chance to “break the ice between the Iranians and the West,” the report quoted him as saying.

The WikiLeaks files follow recent revelations of Merkel’s discussions with former French president Nicolas Sarkozy on the Greek economic crisis, as well as her private conversations with a personal assistant and other top German ministers and experts over several years.

They also follow the April 2015 revelations of Germany’s BND intelligence service spying on residents in the European Union, including in Germany, at the behest of the NSA.