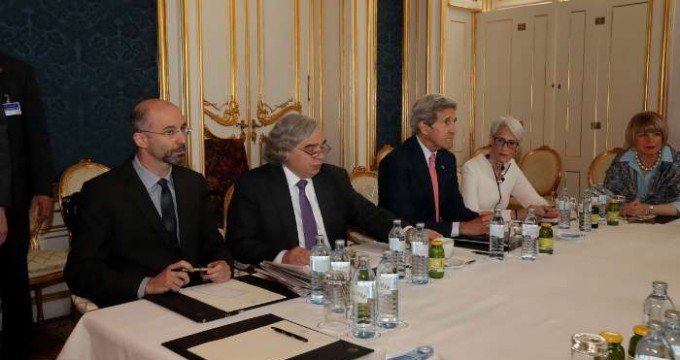 VIENNA — The United States warned Iran on Monday, in both English and Persian, that a preliminary agreement reached two months ago in Switzerland must remain the basis for a final nuclear deal.

The warning appeared to reflect concerns among American and European negotiators that Iran’s supreme leader, Ayatollah Ali Khamenei, has been attempting to backtrack on some crucial elements of the April agreement that was forged in Lausanne, the lakeside resort near Geneva.

“We do see a path forward to get a comprehensive agreement that meets our bottom lines,” said a senior United States official, who could not be identified under the ground rules for briefing reporters. “This path forward has to be based on the Lausanne parameters. Period.”

To reinforce the message, the official turned to an aide who repeated the message in Farsi.

The United States and its negotiating partners are no longer trying to meet the original Tuesday deadline for wrapping up a final accord. Yet American officials hope to conclude the agreement so it can be submitted by July 9 to Congress, which would then begin a 30-day review period.

“No one is talking about a long-term extension” of the negotiating deadline, the official said. “No one.”

The briefing came during a break in the talks during which Iran’s foreign minister, Mohammad Javad Zarif, spent the day in Tehran in what appeared to be an effort to reconcile the terms of the prospective agreement with Ayatollah Khamenei’s recent pronouncements in which he seemed to back away from crucial elements of the April understanding, including how long Iran’s stockpile of nuclear fuel would be frozen and how free international inspectors would be to demand access to Iranian military sites believed related to its nuclear program.

European and American officials expect Mr. Zarif to return on Tuesday, but it is unclear whether his instructions will be to strike a deal or not. In a sign that the talks will intensify in coming days, the Iranian news media reported that Ali Akbar Salehi, the head of Iran’s atomic energy organization who has been ailing, would be accompanying Mr. Zarif when he returns to the negotiations here.

Mr. Salehi and Ernest J. Moniz, the United States energy secretary, who is in Vienna, had productive talks during the Lausanne round, and Mr. Salehi’s absence had been seen as a potential obstacle. Mr. Zarif will also be joined by Hossein Fereydoun, a younger brother of President Hassan Rouhani, who was also present in Lausanne, the Iranian news media said.

The remaining issues concern the scope of inspections, what arrangements might restrict the development of more efficient types of centrifuges after the first decade of the accord, the pace of sanctions relief and how to address suspicions that Iran has engaged in covert work on nuclear designs in previous years.

The senior American official discounted reports that the United States was seeking to renegotiate arrangements it agreed to in Lausanne that would allow Iran to use the underground installation it has built at Fordo for research instead of shutting it. Those provisions allow Iran to keep 1,000 centrifuges in that installation, but only a small portion can be operated in cascades to produce isotopes and none can be used to enrich uranium for at least 15 years.

“We are where we were in Lausanne,” the official said, referring to the Fordo installation.

But the official declined to say if the United States might agree to adjust some elements of the Lausanne framework in return for new Iranian concessions.

“We are building this understanding on the Lausanne parameters, and I am not going to go further than that,” the official said in response to a question. “I am not going to negotiate here.”

One major issue of crucial importance to the Iranians is the timing to suspend or remove economic sanctions. While details remain to be worked out, it appears Iran may use the two or more months needed to get the accord through Congress, and the additional time it would take to pass a new United Nations Security Council resolution, to begin storing its centrifuges and ridding itself of more than nine tons of low-enriched uranium.

That would speed the time it would take Iran to quality for sanctions relief. Previously, Iranian officials had said they would never ship the material out of the country, but it now looks like they may have no other choice, officials say.

It is not known whom Mr. Zarif met with in Tehran and whether he consulted with Ayatollah Khamenei. But Iran has a special council on nuclear issues, made up of top security and foreign affairs figures that oversees the negotiations and reports to the ayatollah.

Mansur Haqiqatpur, a senior Iranian member of Parliament, said that an agreement was possible if the Americans stopped their “bullying attitude.”

The goal, he said, was to reach an accord by July 8, he added, indicating that Iran, like the Obama administration, also had the United States Congress in mind.

If a deal occurs later in the summer, the congressional review period would double to 60 days because of the August congressional recess. That would give critics more time to try to drum up opposition to the agreement and also delay the time when sanctions on Iran might be eased if the accord is enacted. Ayatollah Khamenei has said that sanctions must be lifted quickly.

American officials denied Iranian newspaper reports that President Obama has recently sent a letter to Ayatollah Khamenei urging him to pursue an agreement.