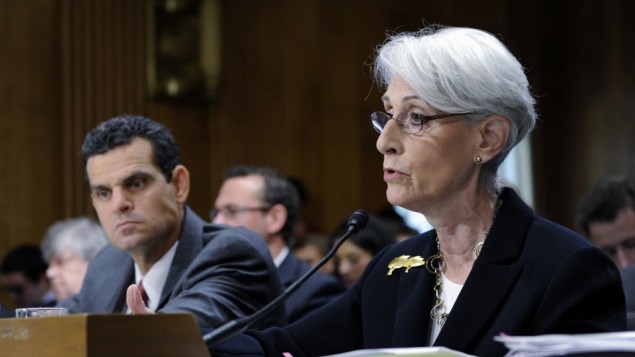 VIENNA—Officials with the Department of State threatened to call security Monday on a Washington Free Beacon reporter who was attempting to report on a briefing held by senior Obama administration figures in Vienna on the eve of an expected nuclear agreement with Iran.

Two State Department officials booted the Free Beacon from a room where Wendy Sherman, the undersecretary of state for political affairs, was talking to reporters, despite the Free Beacon’s being credentialed by the Austrian government for the ongoing Iranian nuclear talks.

Western observers present in Vienna for the talks linked the State Department’s behavior to jitters over media coverage revealing a still growing list of concessions being made to Iran by the Obama administration.

Melissa Turley, a State Department official, approached a Free Beacon reporter and demanded that he leave the room.

“You’re not registered with the U.S. press,” Turley said after being informed that the Free Beacon was attending the event.

“You have a press pass from the [European Union], not from me,” Turley said, after being informed that the Free Beacon was officially credentialed to cover the event.

Turley and her colleagues then threatened the reporter, instructing him to leave the room or be dealt with by “security.”

“I’m going to have to get security,” added another State Department official who came to assist Turley in ejecting the Free Beacon.

At one point, Marie Harf, another State Department official, was also involved in the situation.

The State Department officials said that if the Free Beacon has “a problem” with being removed from the briefing, it should file a case with Associated Press reporter Matthew Lee, who is president of the State Department Correspondents Association.

It is not clear why the State Department referred the Free Beacon to Lee.

During the briefing, which included around 30 reporters, Sherman was explaining to reporters how the United States would modify long-standing demands that Iran disclose its past nuclear weapons work.

Critics of the Obama administration’s diplomacy have in recent weeks expressed concern that Iran will be allowed to continue enriching uranium, the key component in a nuclear weapon, and not be forced to disclose the full extent of its nuclear weapons work.

Officials told reporters Monday in Vienna that that they would not press the Iranians to meet the international demand that inspectors be allowed to access all Iranian military sites. The administration’s stance comes after a speech by Ayatollah Ali Khamenei ruling out any such inspections.

One Western source present in Vienna for the talks said that “if this is what they’re already doing to reporters, to journalists trying to report on the concessions they’re making to the Iranians, imagine how bad things will get when the congressional debate over the deal begins.”

“‎The State Dept-hosted background briefings ‎are for reporters traveling with Secretary Kerry and those who are members of the State Dept Press Corps, who are from outlets credentialed to attend the daily press briefings in Washington, D.C.,” Turley said in an email.