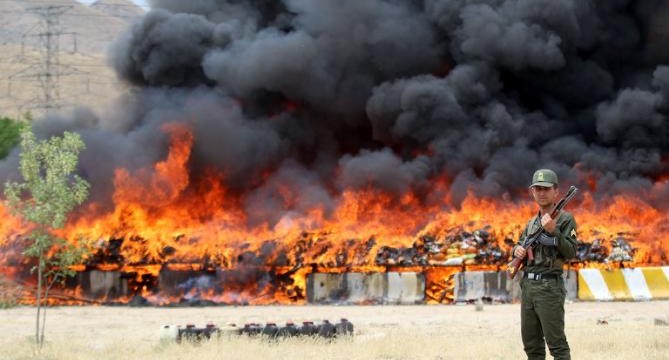 Tehran (AFP) – Iran burned 100 tonnes of drugs recovered from traffickers in a ceremony on Saturday to coincide with an international anti-drug day meeting in Tehran, local news agencies reported.

The burning, in the northeastern city of Mashhad, was live-streamed to an audience in the capital, a day after the International Day Against Drug Abuse and Illicit Trafficking.

Iran, with an annual consumption of 500 tonnes of narcotics, suffers severe drug-related problems, mostly due to heroin and methamphetamine use.

More than 1.3 million of Iran’s 78 million population are addicted and each day eight people die and 70 new users become hooked, according to the Mehr news agency.

Interior Minister Abdolreza Rahmani Fazli told the summit: “This is a high number for us.”

Most opium entering Iran comes in from eastern neighbour Afghanistan, which produced 5,500 tonnes in 2013, a 49 percent increase on 2012, according to the UN Office on Drugs and Crime.

The route leads from Afghanistan to the Makran coast of Iran and Pakistan and across the Indian Ocean to East Africa.

It was discovered in 2010 when Tanzanian police detained four locals and two Iranians with 95 kilogrammes (209 pounds) of heroin in the port of Tanga.

The route is an alternative to the traditional opium trail through Central Asia and the Balkans.