A look at Iranian newspaper front pages on June 18

IFP has taken a look at the front pages of newspapers on Thursday and picked headlines from 14 of them. IFP has simply translated the headlines and does not vouch for their accuracy.

Remarks by the Supreme Leader in a meeting with Iraqi Prime Minister Haider al-Abadi on the country’s efforts to take on terrorists and the need for unity between Shiites and Sunnis as well as comments by President Hassan Rouhani on Iran’s determination to help Iraq in its fight against ISIL dominated the front pages of most Iranian dailies on Thursday. The reformist dailies also highlighted moves by hardliners to disrupt a funeral procession which was held Tuesday for Iranian servicemen who were killed during the Iran-Iraq war.

Ettela’at: Senior Iranian nuclear negotiator Seyyed Abbas Araghchi has said that sanctions against Tehran will be removed the day the nuclear deal goes into effect.

Ettela’at: The Iranian president has said that ties between Tehran and Baghdad are strategic.

President Rouhani made the remark in a meeting with the Iraqi premier.

Ettela’at: Russian President Vladimir Putin has said that Moscow will give a painful response to border threats from NATO.

Ettela’at: Supreme Leader of the Islamic Revolution Ayatollah Seyyed Ali Khamenei has thanked the Iranian people for their massive participation in the funeral of the Sacred Defense martyrs. 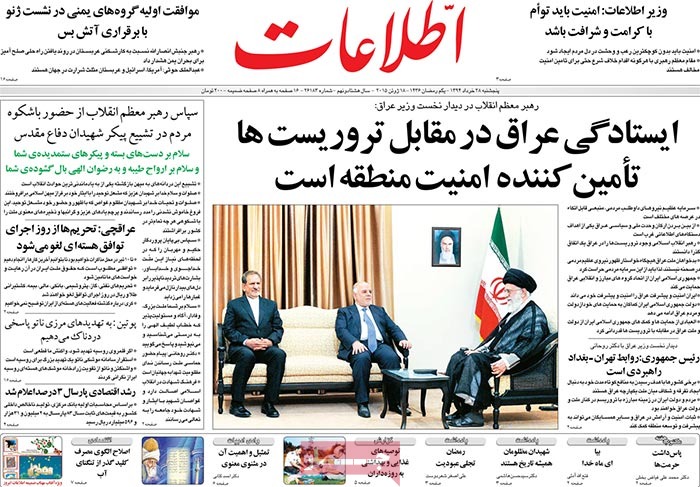 Afarinesh: “Iran stands by Iraq in its fight against ISIL terrorists”.

President Rouhani made the remark in a meeting with the Iraqi prime minister in Tehran. 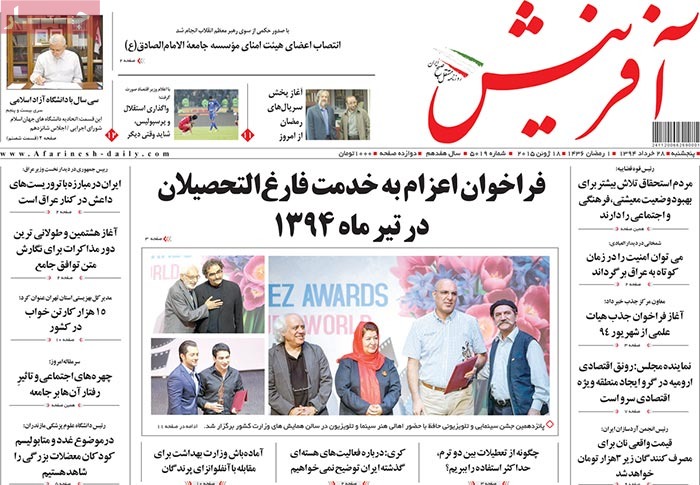 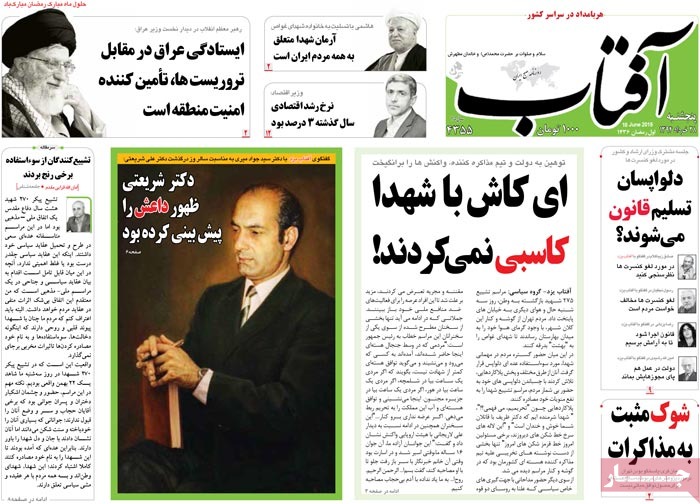 Reactions pour in to the politically motivated move by the so-called Worriers in a national gathering [attended by people from all walks of life].

The daily takes a look at efforts by the Worriers [the supporters of former President Mahmoud Ahmadinejad and critical opponents of the Rouhani administration] to hurl insults at the heads of the executive and legislative branches at a national funeral procession for the martyred Iranian soldiers. 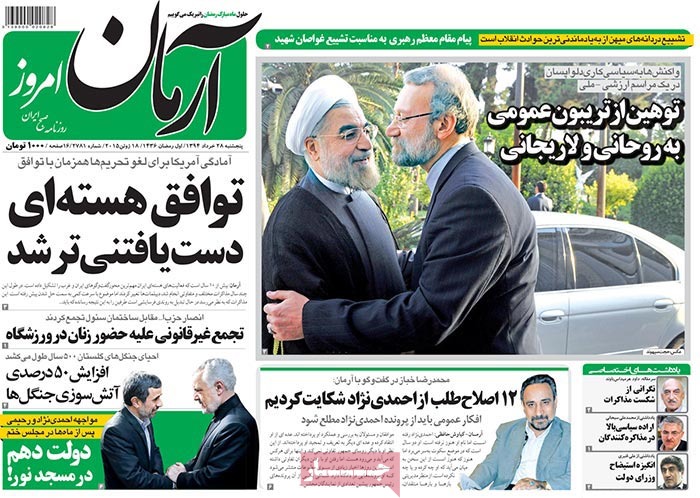 Asrar: “The [lofty] ideal of the martyrs belong to all Iranians,” said Chairman of the Expediency Council Ayatollah Akbar Hashemi Rafsanjani.

Asrar: The interior minister has said that [organizers of] unauthorized gatherings will be seriously dealt with.

Abdolreza Rahmani Fazli made the remark in reaction to reports that a group of people have planned to stage a gathering outside the Ministry of Sports and Youth [to protest a possible plan which would allow women to enter stadiums and watch sporting events], adding that the police have been given the order to deal with  illegal assemblies. 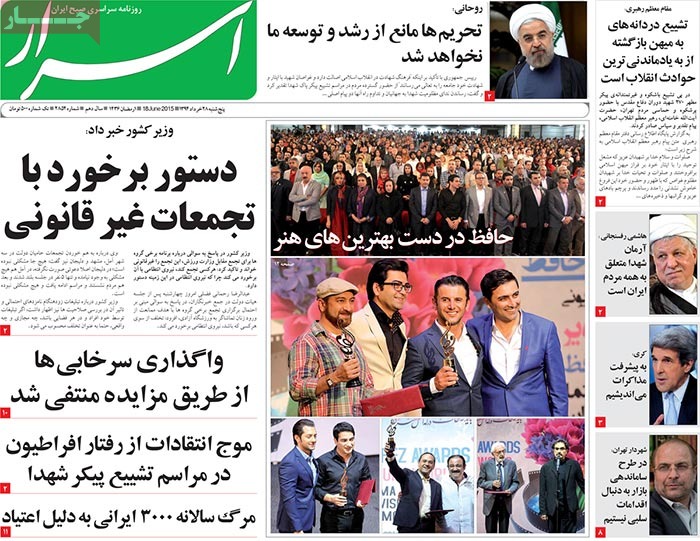 Ebtekar: Warning by the families of the martyrs to disrupters of the funeral procession [of Iranian divers]

In a letter, family members of 110 martyrs condemned the unethical behavior of some individuals who disrupted the funeral service of 270 Iranian servicemen –including 170 divers – who were martyred in the Iran-Iraq war back in the 1980s. 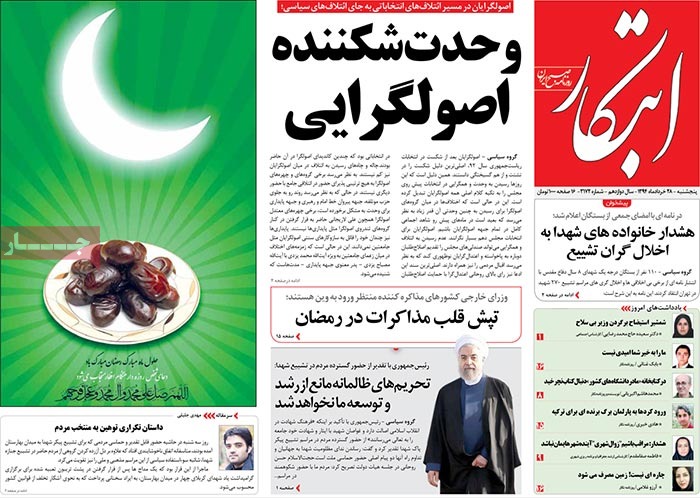 Etemad: The governor of the Central Bank of Iran has said that a single foreign exchange rate system will be introduced [in Iran] in the near future. 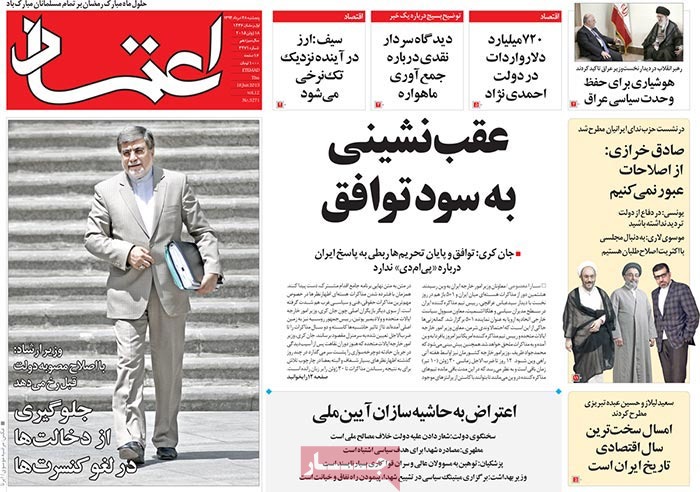 Farhikhtegan: The martyrs are national.

Reactions by Cabinet members and other officials to efforts by some to score political points from the funeral of 270 soldiers who fell martyr during the Sacred Defense.

Government Spokesman Mohammad Bagher Nobakht: Those who are behind such moves are acting against the country’s national interests, no matter what their motives are. 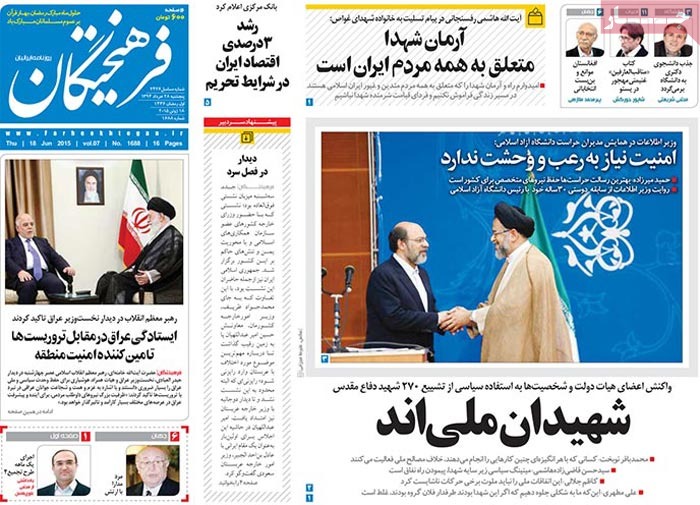 Iran: “The unity between Shiites and Sunnis should not be dented,” said the Supreme Leader in a meeting with the Iraqi prime minister. 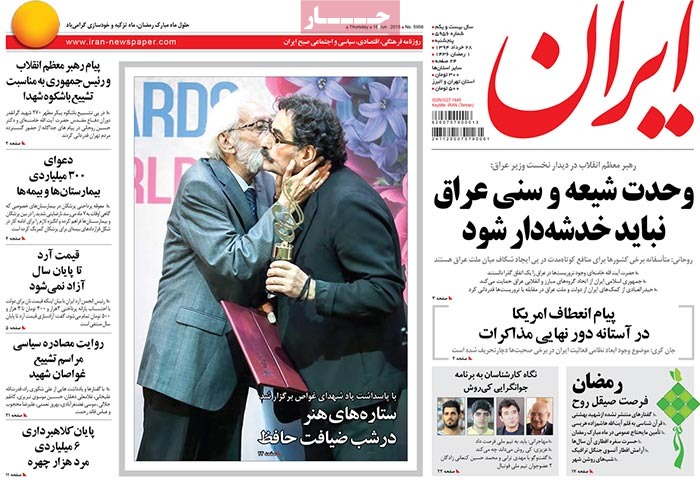 Jomhouri Islami: The US withdrawal from its claims of military activities in Iran

The eighth round of nuclear talks – the longest – between Iran and P5+1 has opened with the two sides working toward drafting the comprehensive deal. 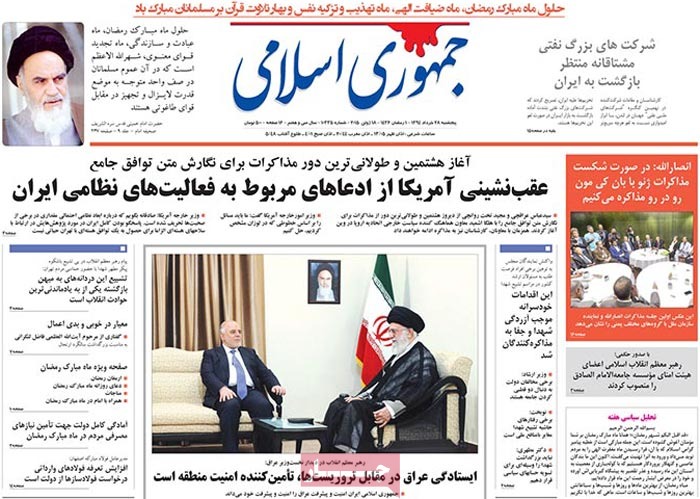 Kayhan: The Iranian MPs have overwhelmingly agreed to prioritize a motion which obliges the government to maintain the country’s nuclear achievements. 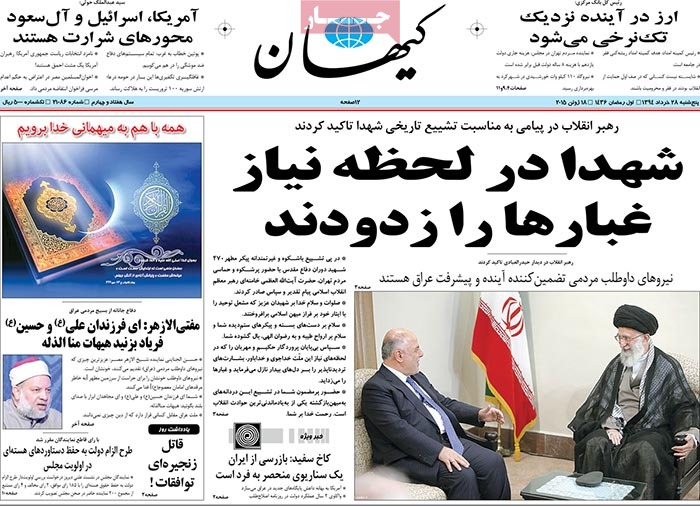 Nasl-e Farda: The health minister has said that [reports on] shortages of medicine are aimed to poison the atmosphere. 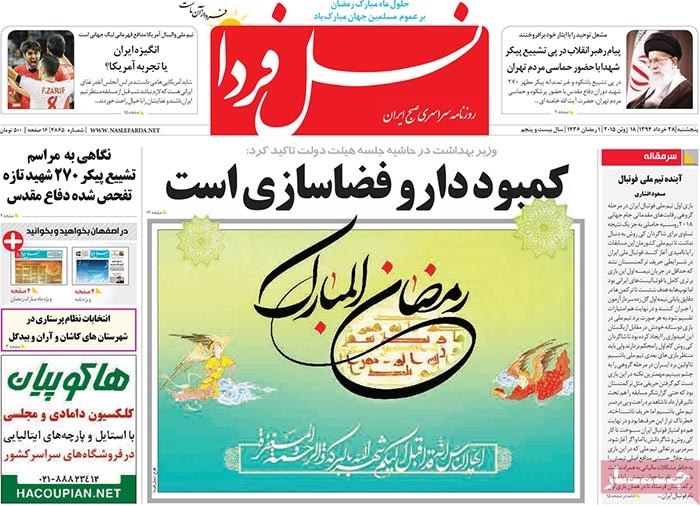 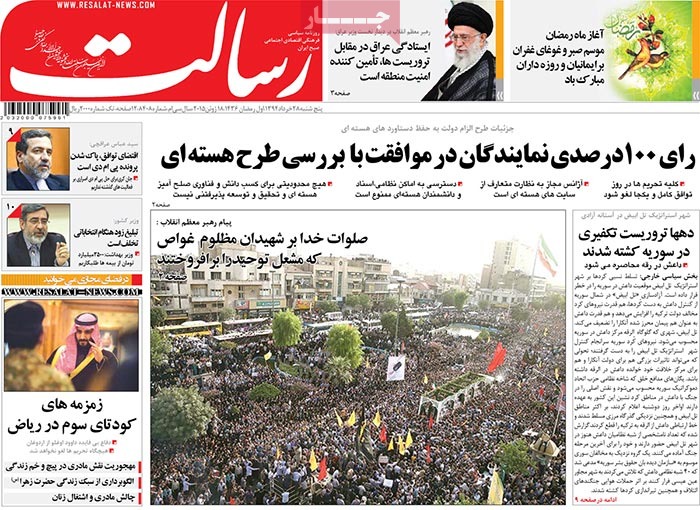 Sharq: Members of Ansar Hezbollah, a hard-line group, have staged a gathering [outside the Ministry of Sports and Youth] to protest women’s likely presence in stadiums. 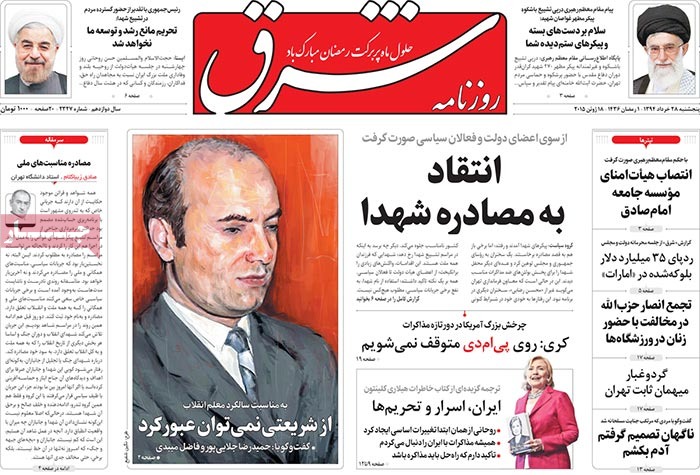