A look at Iranian newspaper front pages on June 13

IFP has taken a look at the front pages of newspapers on Saturday and picked headlines from 18 of them. IFP has simply translated the headlines and does not vouch for their accuracy.

Conviction of Mehdi Hashemi, the son of Ayatollah Akbar Hashemi Rafsanjani, on bribery, embezzlement and security charges dominated the front pages of Iranian newspapers Saturday. Also under the front-page spotlight was the performance of the National Orchestra in Tehran for the first time in several years.

Afarinesh: “Given the circumstances in the region, cooperation between Iran and Russia is imperative,” said the Iranian president.

Hassan Rouhani made the comment as he talked on the phone with Vladimir Putin to congratulate his Russian counterpart on the national day of the Russian Federation. 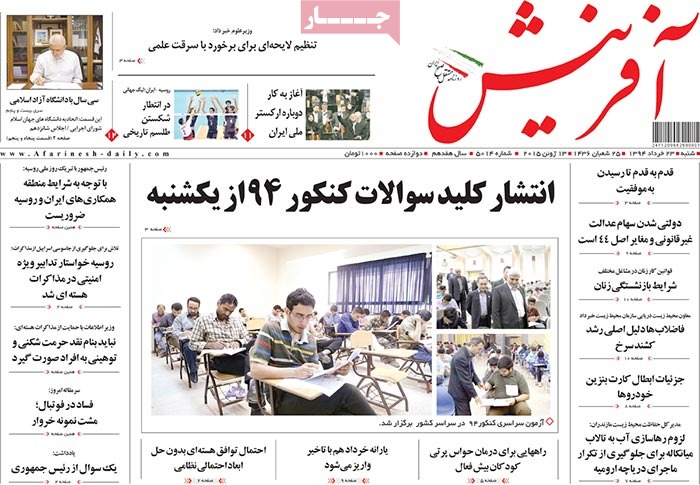 Afkar: “IS is too insignificant a force to dare approach Iran’s borders,” said the chairman of Parliament’s National Security and Foreign Policy Committee. 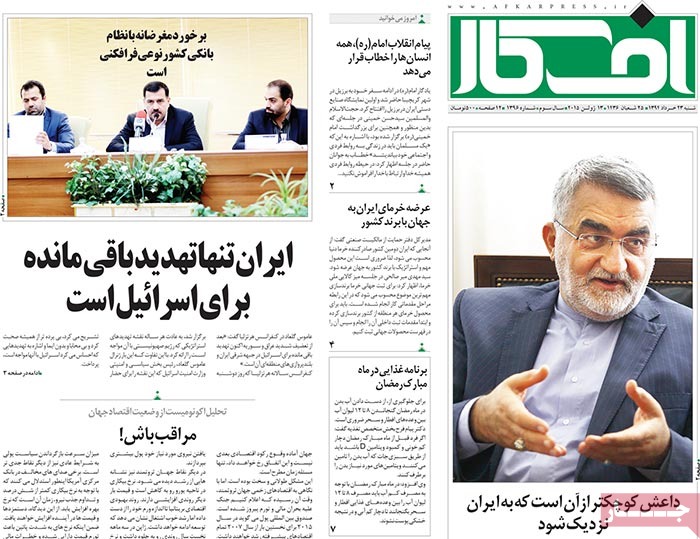 Aftab-e Yazd: Some 2,400 people were illegally hired at the Presidential Office under Ahmadinejad. 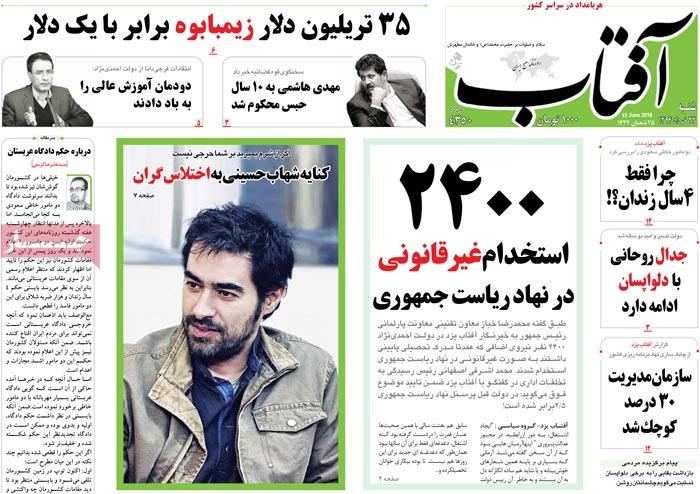 Arman-e Emrooz: With nuclear talks at a sensitive juncture, the so-called Worriers are turning up the heat by conducting polls which follow no decent criteria. 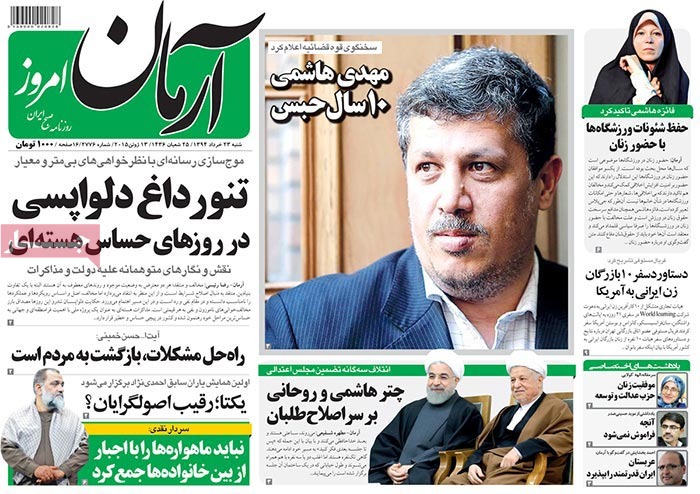 Asrar: “Ahmadinejad should answer for the embezzlement of his underlings,” said a member of the Principlist Caucus.

Asrar: The head of the Basij Organization has said that the establishment should not resort to force to seize satellite dishes.

Ebtekar: Mehdi Hashemi has been acquitted of espionage charges.

However, the judiciary spokesman has confirmed that the son of Ayatollah Hashemi Rafsanjani has been sentenced to 10 years in jail. 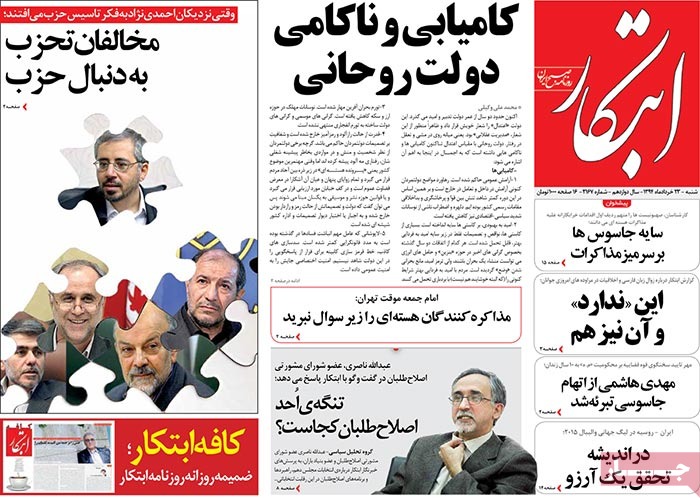 Emtiaz: The three top items on the list of felonies and misdemeanors the Iranian youth commit are drugs, theft and violence. 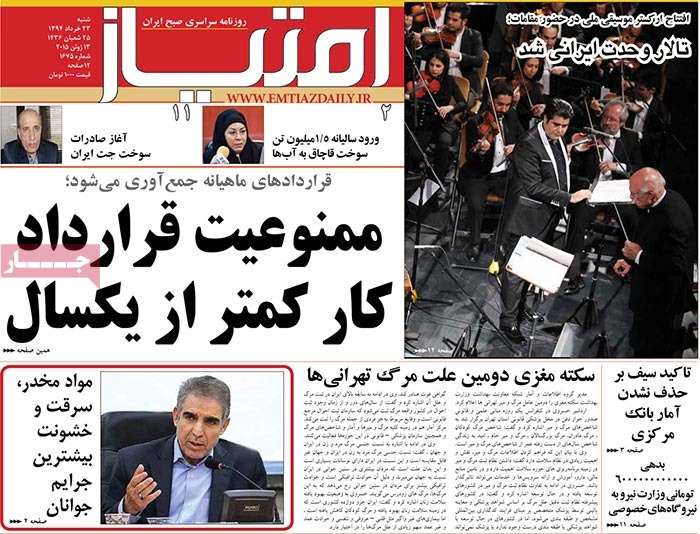 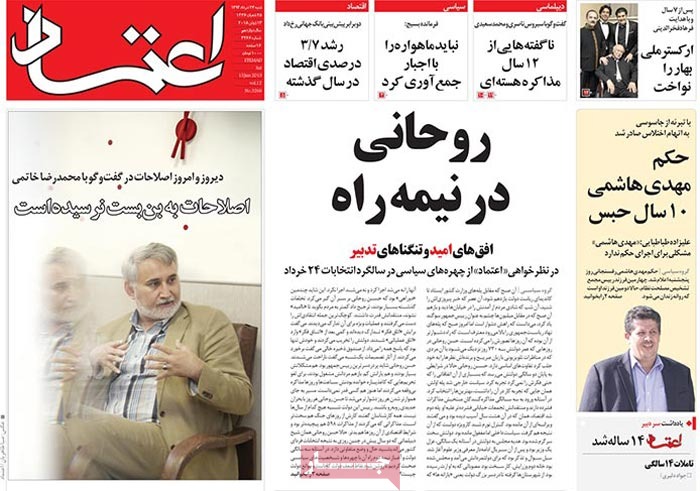 Ettela’at: The Supreme Leader has issued a message of condolences following the demise of the representative of Gilan Province in the Assembly of Experts. 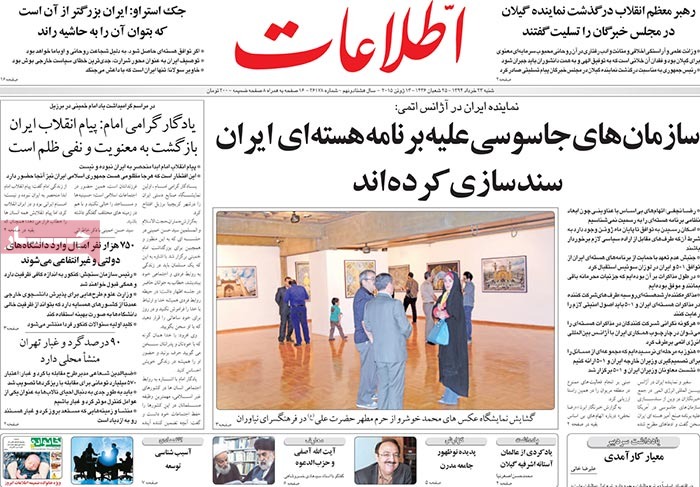 Hemayat: “Only 20 percent of the problems Iran’s economy is facing can be pinned on sanctions,” said Parliament Speaker Ali Larijani. 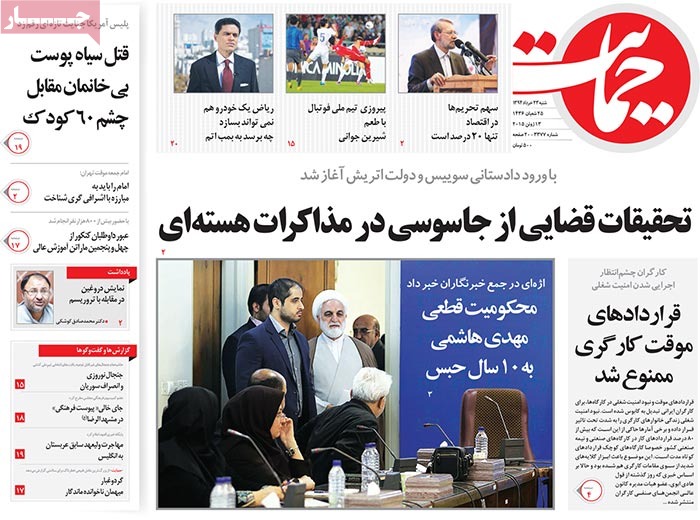 Iran: Iran has taken back the world title of the third largest producer of crude oil.

Iran: Iran’s National Orchestra has returned onto the stage at a ceremony attended by senior officials and artists. 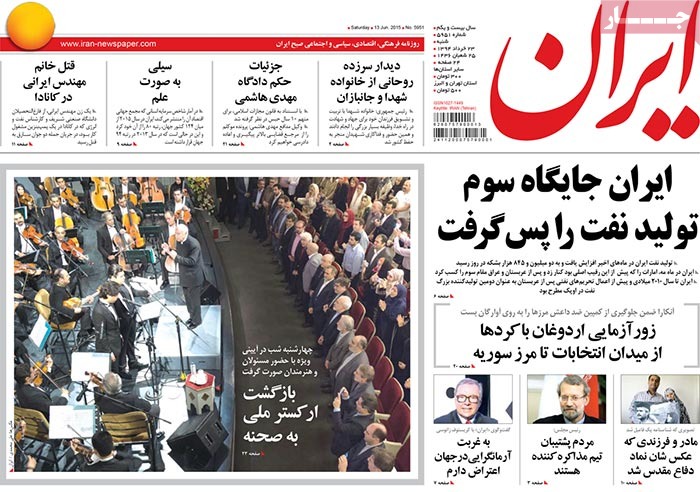 Jomhouri Islami: “Some $10 billion is to be dedicated to efforts to contain runoff waters in border areas,” said the executive vice-president. 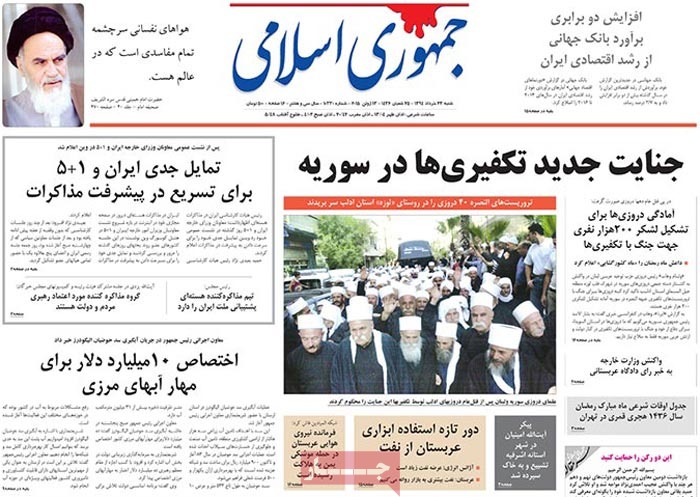 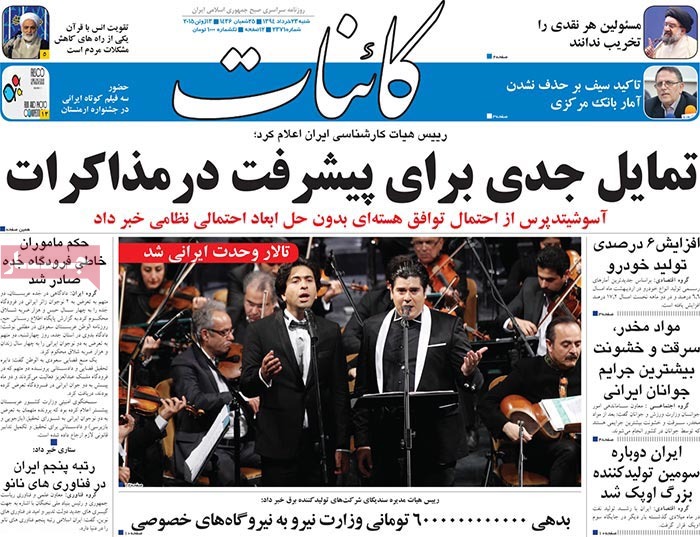 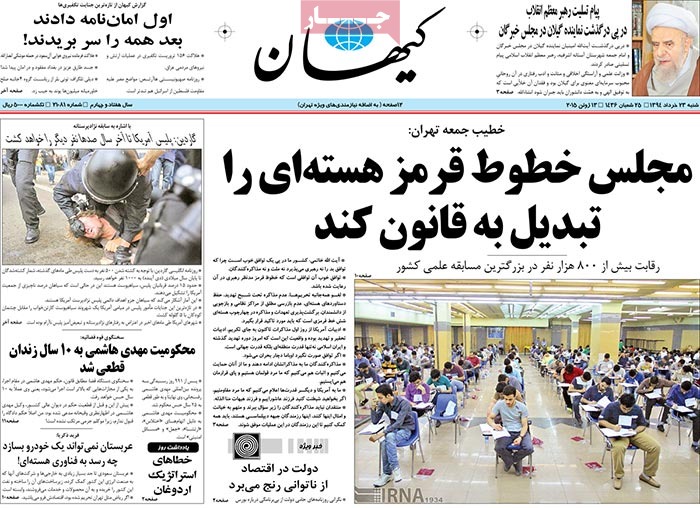 Mardomsalari: Iran’s national volleyball team is thinking about its first win in the FIVB World League.

Iran will take on Russia on Russian soil later on Saturday. 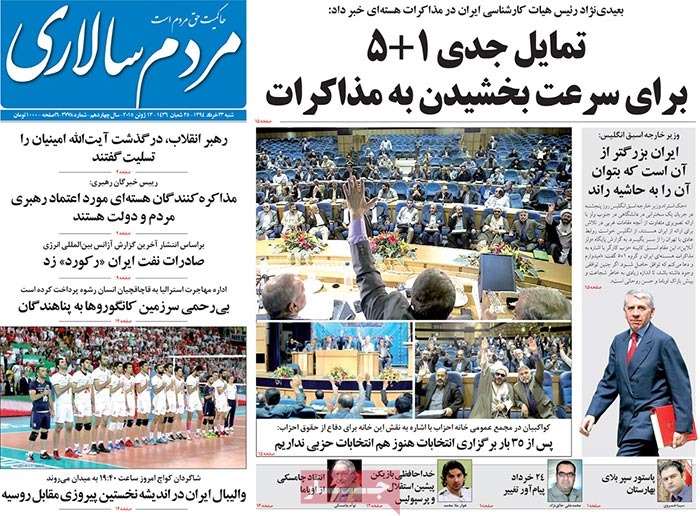 Qods: “The number of cancer cases in Iran has increased 10-fold,” warned the deputy health minister in a congress on cancer. 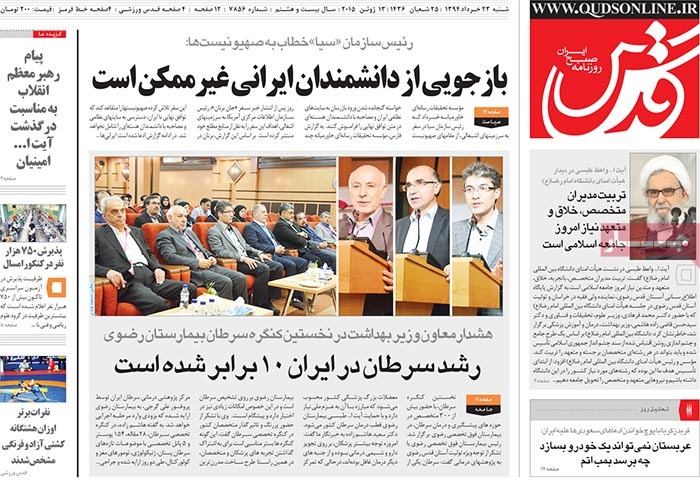 Resalat: “The Obama administration will plunge into a crisis if a nuclear deal with Iran is not clinched,” said Tehran Friday Prayer Leader Ayatollah Ahmad Khatami. 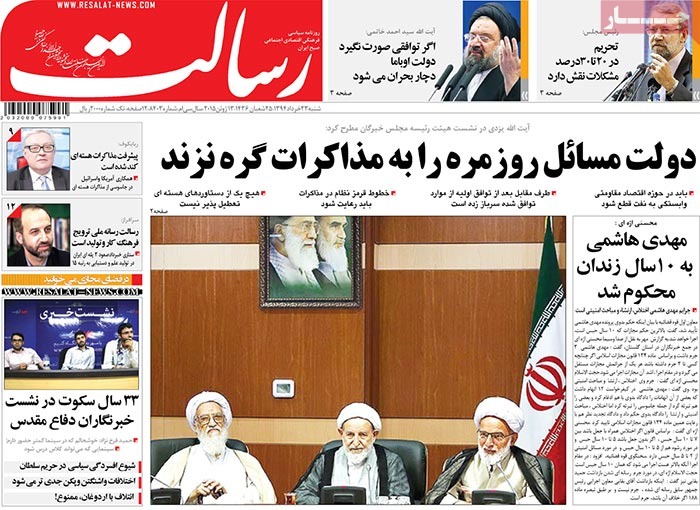 Sharq: Reza Zarrab, a Turkish tradesman of Iranian origin, has been sentenced to five years in prison. 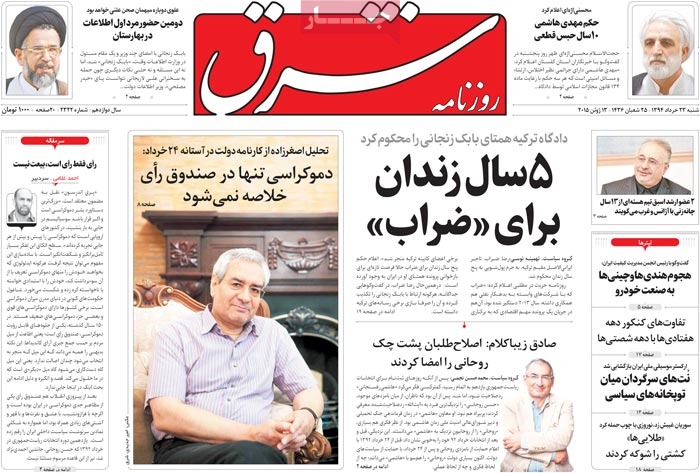