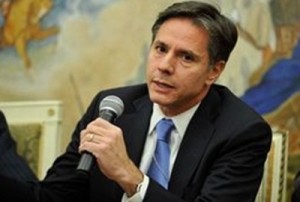 Iran and the P5+1 group of countries could fail to reach a comprehensive settlement on Tehran’s nuclear program by the June 30, 2015 deadline, US Deputy Secretary of State Tony Blinken said at the American Jewish Committee’s Global Forum on Monday.

WASHINGTON (Sputnik) — Iran and the P5+1 group are working toward a June deadline to sign a nuclear deal that would ensure the peaceful nature of Iran’s nuclear program. Tehran agreed to cut back uranium enrichment activities and decrease its number of centrifuges in exchange for sanctions relief.

“The June 30 deadline is fast approaching, and we [Iran and the P5+1 countries] do not yet have a comprehensive [nuclear] agreement, and there remains a chance that we won’t get one,” Blinken stated. “If we don’t get what we need on a few key issues, we won’t get there.”

Blinken emphasized that Iran must agree to an intrusive inspection regime and the gradual lifting of sanctions based on verifiable results that it has met its commitments.
A comprehensive nuclear agreement, Blinken argued, represents the best option for preventing Tehran from acquiring a nuclear weapon, adding it was a “fantasy” to believe that intensifying sanctions will force Iran to capitulate on every demand.

Blinken added opponents of the agreement should take into consideration the International Atomic Energy Agency (IAEA) inspectors have verified that Iran honored all of its commitments under an interim agreement that has been in place since 2013.

The process for lifting sanctions and the scope of inspections have been sticking points during the talks. Iran is looking for immediate sanctions relief and is opposed to allowing inspectors into military sites, which Tehran says are not related to its nuclear program.

In April, 2015, Iran and the P5+1 group of nations, comprising the United States, China, France, Russia and the United Kingdom plus Germany, agreed to a political framework on the Iranian nuclear program in the Swiss city of Lausanne. The parties pledged then to finalize a comprehensive agreement by June 30, 2015.