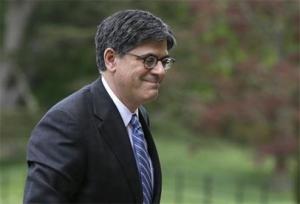 US Treasury Secretary Jacob Lew has defended the ongoing talks over a nuclear deal with Iran during a speech to a pro-Israel audience.

Lew was speaking in favor of a possible deal between Iran and the P5+1 on Sunday, while he was being booed and heckled by the audience.

“A diplomatic solution is the best, most enduring path to achieve our goal of keeping Iran from obtaining a nuclear weapon,” he said at an annual New York conference sponsored by The Jerusalem Post.

“This snapback mechanism will give us crucial leverage to ensure that Iran remains in compliance for years after any agreement is reached,” he added.

Iran and the P5+1 group – the US, Britain, France, China, Russia and Germany – reached a landmark framework agreement over Tehran’s nuclear program in Switzerland on April 2. The two sides will now work to draft a final accord by the end of June.

However, he said that no deal will be “finalized” unless it “meets a tough standard of intense verification and scrutiny.”

If Iran fails to comply with the terms of the potential deal, the US will use other “options, including economic and military measure,” the secretary noted.

Lew’s comments came as Israeli officials are calling on Washington to soften the June 30 deadline because they argue that it is inadvertently providing Tehran leverage in the negotiations.

Israeli Energy Minister Yuval Steinitz, a former intelligence minister and a high-ranking Likud Party member, has claimed that “The Iranians are using delay tactics. It seems they want to come close to the deadline without an agreement.”

In response to a campaign waged by Israeli Prime Minister Benjamin Netanyahu to hamper a nuclear deal with Tehran, President Barack Obama said last Friday that “a verifiable, tough, agreement” would be the best way to address the issue.