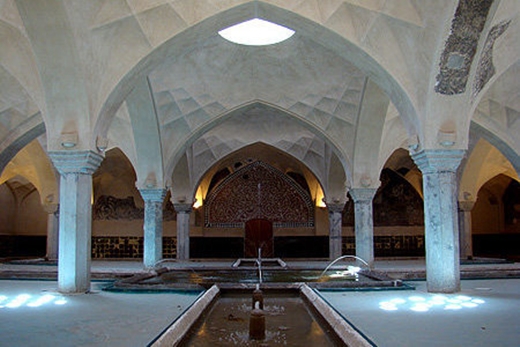 A burning candle, a hot bath; connect the dots

An Iranian inventor has replicated the boiler of Sheikh Bahai’s Bath to unravel the secret of the historical bath.

The bath of Sheikh Bahai in which only an ever-burning candle warms water is the manifestation of architecture and the creative mind of Iranians in designing buildings. For years the unsolved mystery of the bath has preoccupied many scientists around the world.

Sheikh Bahai was one of the most outstanding scientists who lived in the Safavid period. He was popularly known for his mastery of mathematics, architecture and engineering. His namesake bath is among Bahai’s most outstanding works.

[Sheikh Bahaei lived almost 400 years ago, and was a philosopher, mathematician and astronomer. He has a recognized legacy of 88 articles, letters and books along with poetry in Persian and Arabic. As the architect of Isfahan’s Imam Mosque, he demonstrated his knowledge of architecture and geometry. Sheikh Bahai also designed the Manar Jonban, the Shaking Minarets, which continue to move in Isfahan.]

The bath, which was open to the public up until 20 years ago, was registered as one of Iran’s national heritage sites back in July 1998. Mehr News Agency has filed a report on the historical bath and how its heating source works. The following is the translation of part of the report:

The bath is located to the south of Nizam al-Mulk Dome (south of the Grand Mosque) in Isfahan. It is similar to the baths which were operational in the Safavid period and is historically known as a mysterious bath, because its water gets warm without using a direct energy source. In other words, the heating system of the bath is an engineering masterpiece which has tapped into the principles of physics and chemistry.

When the repair work was under way in Sheikh Bahai’s house, clay pipes and connected wells were discovered on the floor of a building next to the house, shedding light on where the energy of this candle comes from. Archeological studies also revealed that the sewage system in Isfahan was connected to the bath through pipes.

Production of gas from sewage – biogas* – is a project those involved in the Hygienic and Environmental Engineering take care of. The method is used in the US and European countries to recycle sewage water and produce fuel. […]

How can a candle warm an entire bath?

Ali Asghar Berahmand, who is also the head of the Association of Inventors in the province, said that the heat in Sheikh Bahai’s Bath stemmed from its water container (boiler) which is made of gold.

Gold is a perfect conductor of heat and electricity. A low amount of heat would generate vast amounts of energy, thus warming the golden boiler, he further said.

As to why Sheikh Bahai had refused to uncover the secret of the bath’s heating system, the Iranian inventor says he was likely concerned about the thieves wanting to steal the gold in the bath if they had known about it.

In the replicated bath boiler, gold has been replaced by copper which can be used in home baths as well and save 30 percent in fuel consumption.

Berahmand’s invention – the unique boiler – has won two gold medals in Switzerland and Moscow in 2006 and 2007.

*Biogas is a mixture of different gases produced by the breakdown of organic matter in the absence of oxygen. Biogas can be produced from raw materials such as agricultural waste, manure, municipal waste, plant material, sewage, green waste or food waste.

This article was translated by IFP from Mehr News Agency