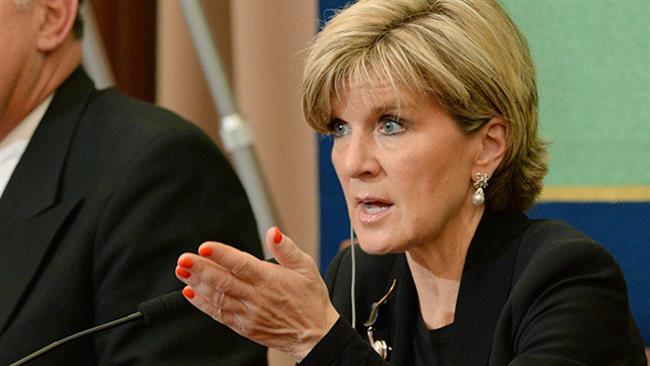 Iran must be included in Paris talks over ISIL: Australian FM

Australia’s Foreign Minister Julie Bishop has called for the inclusion of Iran in ongoing talks in France on how to deal with the Takfiri ISIL terrorist group.

The Australian foreign minister made the remarks on Tuesday as she set out to join the talks in Paris. The French capital is hosting foreign ministers from the 24 member states of the US-led coalition allegedly fighting the Takfiris in Iraq and Syria.

Referring to the activities of ISIL in the Iraqi city of Ramadi, Bishop said, “It throws into quite stark relief what’s missing, and that’s dialogue with Iran,”The Australian newspaper reported.

“Iran is not included in the coalition’s discussions. We must have one of their military commanders and political leaders at the table,” she added.

Iran has been providing military advice to the Iraqi government in its fight against the Takfiri ISIL terrorists.

On May 16, Iraqi President Fuad Masum, in an exclusive interview with the Arabic-language al-Mayadeen news network, lauded Iran as the first country to have provided military assistance to the government in Baghdad in the battle against the Takfiri ISIL terrorists.

Masum also said Iraq only receives consultations from Iranian military experts in the fight against ISIL, underlining that the Islamic Republic has no military presence inside Iraq.

Meanwhile, addressing the Paris conference on Tuesday, Iraq’s Prime Minister Haider al-Abadi blamed the international community’s inaction for the advance of the ISIL terrorists in the region. He said that the terrorist group’s progress represents a “failure” for the entire world.

Iraq “needs all the support of the world” to fight the terrorists, but “we are not getting much. I think this is a failure on the part of the world… There is a lot of talk of support for Iraq, there is very little on the ground,” Abadi said.